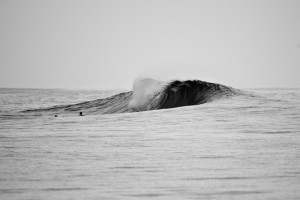 Forty days later, I find myself back home in Southern California, looking straight up into the light polluted sky on a clear night. I am laid back on my truck bed, tailgate down, with my legs hanging off the edge. It is about 11 pm, only five and a half hours after returning home. Staring up at the stars I carefully try to retouch the hundreds of memories in my mind. Bits and pieces of images flash in my head of the Jawara tribe, the city of Chennai, Hut Bay, fresh sashimi, and 80 mph winds. I think of the surf and again my mind begins to playback many memories.

I will never forget what it was like to motor around the corner of an island at sunset, after a full day of searching for waves, only to find empty head high peeling lefts down a point-like coral reef. I will always remember the hours of downtime and constant humor of our group and our French deckhand Cedric. We did not see another charter boat for twenty days, and that is only one characteristic of isolation that the Andaman Islands hold.

Isolated? Yes! However, it is an amazingly rich and lively place. Whether we were on land or beneath the ocean, the islands were teeming with life. Each island was made up of nothing but nature. We passed by so many islands that looked identical to the last. Many had only a small ring of white sand beach at the shoreline. Just ten or  fifteen feet above the high tide line, giant hardwood trees reaching upwards of 100 feet. Instead of foot prints and trash, the beaches were “littered” with turtle nests and tiny trails left by hermit crabs. 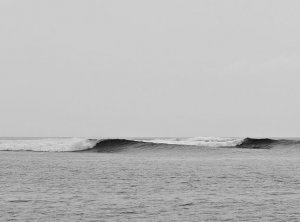 The water was incredibly warm, and during the longest surf sessions in the mid day heat the ocean seemed more like a heated wave pool than a giant body of water. With peeling crystal clear, blue water lefts, offshore winds and no other boats around, a line up could not look anymore inviting. With binoculars locked to our eyes we found our best discoveries. As the boat was on route into unknown coastline we kept our eyes peeled for any signs of waves.

There were high and low points of our discoveries but that was all part of the adventure. Surfer and filmmaker, Mark Arico planned our trip to the Andaman Islands with one wave in mind, Kumari Point. Kumari was labeled as one of the worlds finest coral reef right points.  We had high hopes of sitting on this wave and scoring freight train barrels. Upon our arrival we discovered that Indo’s 2004 earthquake destroyed Kumari’s great set up. The reef was now elevated above sea level and the waves quality was a fraction of what it used to be.

With the thought of Kumari’s past and how good the wave was, it was hard to mov 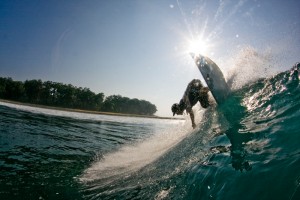 e forward in search of an alternative. From what we knew, this area was the only place with documented surf spots. We were forced out of our comfort zone and into the unknown to look for surf.

By the afternoon after passing many spots with potential we took a 3 hour course offshore to a small island as our last result. Rounding one side of the island we witnessed a onshore right that looked uninviting. However 15 minutes before sunset we came around the east corner of the island and saw lefts peeling down a left point coral reef. This is where our search rewarded us and a short surf before dark proved that this was the spot. The wave wrapped around the reef creating a peeling rippable wall. When we woke up the next day and it was pumping we could finally call this island home for the next couple days. 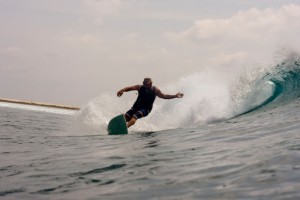 Our findings went deeper than only looking for surf. There was a strong desire to learn what else these islands had to offer. Coming across a stone age culture without any intent was a rare experience many tourists will never encounter. We motored North to find waves and the captain was weary of where we were trying to go. Nothing was known about the small islands we wanted to explore for waves but we took a chance.

We were unlucky however, when the further north we went, we realized that no swell was reaching the reefs. No of us on board could have predicted what was about to happen next. In the distance a small thatched hut was visible amongst the tall trees. It was built right on the sand inside a protected lagoon. Four people emerged out of the hut and climbed over the reef out onto a small coral peninsula and were visible from the boat. With binoculars you could see these people were naked, covered with body paint, and calling us ashore. 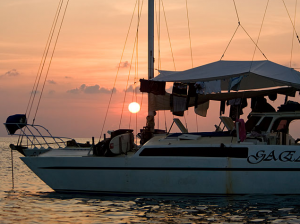 “Headhunting savages” is all I could think as we stopped the boat to continue to check them out. Without knowing what we were getting ourselves into, we took the dingy to where the tribe was waving us in. Four more had come out to the reef and as soon as the dingy was in shallow waters the tribe members stormed across the coral, jumped into the water and before we could do anything there were 8 tribal people accompanying us in our dingy. With smiling and waving we established a friendly relationship as more kids jumped up onto the boat. Pulling and grabbing at everything we had on our boat, they were talking loudly in some abstract foreign tongue. This was a real deal tribal encounter. As they invited us to the beach the kids began to sing and dance. We got on shore and the women and children began to sing a chant and dance. Everyone was laughing and pleased to see us as we handed them gifts we had brought from the boat.

After the visit onshore we took four elders back to the boat for clothing and some rice, and sodas. It is amazing to think how far body language can go when verbal communication is not possible. We could not speak a word to them and they could not understand us but we could read them when they signaled us they were thirsty and hungry. The tribe was taken back to shore with goodies to eat and drink and new clothes on their back. We left that afternoon replaying the smiles and laughs of the people and trying to fathom the life those people live everyday and how it differs so much from what we call the real world.