Posted on May 26th, 2010 by Mark in Blog, Bugg's Boards, Collections, Sets by Shaper, Vintage Boards. Comments Off on Mark Foo

Born in Singapore to Chinese photojournalists for the U.S. Information Agency he relocated to Hawaii at age 10. Foo spent his early childhood surfing the South Shore of O’ahu. His family moved several times during his adolescence, but Foo ultimately returned to Hawaii just before finishing high school. He continued surfing throughout his teen years and in 1977 he joined a professional surfing tour, the IPS World Tour. In the early 1980s, Foo quit the IPS World Tour, stopped competing, and began surfing Waimea Bay, a famous big wave surfing spot on the North Shore of O’ahu. Foo’s passion for surfing big waves led him to surf larger and larger swells.

On December 23, 1994, Mark Foo died in a surfing accident at Mavericks, a big wave in Half Moon Bay, Northern California. Surfer magazine wrote that Foo was sleep deprived after arriving in California on an overnight flight for the swell. During take-off on a wave estimated at 18-20 feet (Hawaiian scale), Foo experienced a seemingly innocuous wipeout which resulted in his drowning. The fateful wipeout was photographed from at least two angles, and shows Foo falling forward near the bottom of the wave. The most popular presumption is that Foo’s surf leash had become entangled on the rocks, with the rushing currents of a second wave passing overhead preventing him disengaging his ankle strap and getting to the surface. This theory was further validated when professional surfer Mike Parsons, who wiped out on the following wave, said that he came into contact with something, possibly Foo, as he was tumbled around underwater. His body was discovered still tied to the broken tail section of his board, inside the Pillar Point lagoon, over two hours after he’d gone down on that fateful wave. Foo’s death shook the big wave surfing community, as one of its famed riders had died. On December 30, over 700 people arrived at Waimea Bay in Hawaii for Mark’s funeral. Approximately 150 surfers paddled into the Bay and formed a large circle. One of the participants, who was carrying a container with Foo’s ashes, paddled into the center of the circle and placed the ashes into the ocean.

Foo helped elevate the popularity of the sport, with his talent, courage, and enthusiasm, and was certainly recognized as one of the greatest big-wave surfers to ever ride the waves. Mark was a favorite subject of photographers, and he had his own cable television surfing program. “If you want to ride the ultimate wave, you have to be willing to pay the ultimate price” was Foo’s philosophy, which he certainly lived until the day of his final ride.
In the surfing sport, Mark Foo’s death has brought about a continuing discourse regarding the safe use on extreme size waves of surfboard ‘leashes’ (a flexible plastic cord which connects, by an ankle belt, surfboards to the ankle of the trailing leg of the surfer when he’s riding his surfboard). Many in the surfing sport believe that Foo’s surfboard leash may have caused or contributed to his death. The leash proponents defend the leash as a useful convenience and as insurance against losing the surfboard, a form of flotation device, in case of a ‘wipe out’, and the leash is a means for the fallen surfer to find their way to the surface air by following the leash cord to the floating surfboard above them on the water surface. Opponents of surfboard leashes in big surf state that a leash can cause the surfrider to collide with his board in a ‘wipe out’, causing head injuries, and the leash can also loop around arms, legs or the surfer’s neck when underwater, and thus dangerously restrict movement to safety or, worse, strangle the surfer with his own leash. Quick-release velcro tear-open-collared leashes have since become standard surfing equipment to address some, but not all, of these dangers. The debates and concerns continue unresolved to this date, and these worthwhile discussions of water safety are, perhaps, the legacy of Foo’s unfortunate demise 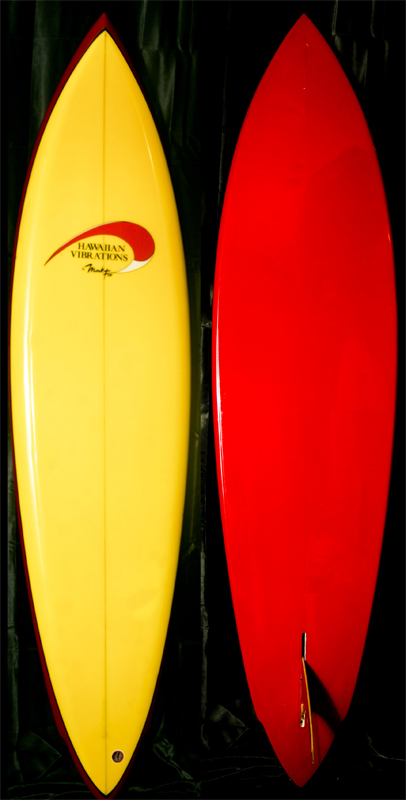 Mark Foo R.I.P.
Mike Diff. R.I.P.
This is a rare collectable 70’s Mini-Gun shaped by Mike Diffenderfer.  Classic Wing Pintail Mark Foo Model. I have only seen one and here it is. Yellow tint deck with red pigment bottom. This board has been restored to its original condition by Randy Rarrick. (R) 9 Purchased this from Steve Collins Collection.