Consistency is a dirty word to young pros. Nobody wants the label, and nobody could benefit more from it than Andy Irons.

In the full range of conditions, Irons has blown out the field on multiple occasions, even taking out six-time world champion Kelly Slater. Given a hint of the “C” word, Irons could be king. Most recently Irons took out a stacked roster of locals and the top WCT pros for his 4th Vans Triple Crown Title, including a win at Haleiwa and the infamous Pipeline Masters.

The lush tropical setting of Kauai has been home to the Irons clan from day one. Phil Irons transplanted from California in 1970, marrying wife Danielle in 1976. Just a year younger than Andy is brother Bruce — his childhood sparring partner and an equally talented surfer.

Kauai, with its pristine waves and isolated beauty, remains Iron’s home between trips. The difficulty of leaving such an idyllic setting for some of the far-from-perfect venues around the world is a continued challenge. Trying to focus in the face of conditions worse than anything you see at home has always plagued Hawaiians, especially those from Kauai.

As an amateur, the opportunities to see the world were still fun, and Irons had no problems rising to the top of his NSSA class during the early ’90s. At the Nationals at Lowers, he was dominant. While still in high school, Irons got his first taste of the big leagues at the 1996 HIC Pipeline Pro. In treacherous surf, he overcame Derek Ho and Shane Beschen in the final — as well as 16-year-old Bruce in the semis — to win the event. Irons was an instant celebrity, swamped with contract offers and a sizable following.

In 1997, Irons qualified for the following season’s WCT. While most of his maiden season was a wash, for two weeks in July, he was on top of the world. In the slop at Huntington Beach, he won back-to-back events, the six-star G-Shock US Open (a major qualifier) and the Op Pro.

Credible sources were picking Irons as the next world champion as he continued the onslaught on Oahu’s West Side to become the Billabong World Junior Champion. It seemed he had arrived. His major sponsor, MCD, released a video profile called Raw Irons, and brother Bruce was applying pressure from below with his own Pipe Masters finals berth. But amid all the hoopla, Irons failed to requalify for the WCT in 1999.

After a couple retirements by seeded surfers, Andy found himself back in the hunt in 2000, climbing into the Top 16 by year’s end thanks to an impressive win in the Billabong Pro at Trestles. In deadly conditions at Gotcha’s Tahiti Pro, Irons defeated Slater to take the trials and was on a course to win the event before the surf deteriorated. At Pipe, he again waxed Slater in one of the best heats of the year, laying down the gauntlet for the former champ. With experience and confidence now on Irons’ side, consistency can’t be too far behind, which is bad news for the rest of the tour. — Jason Borte, February 2001 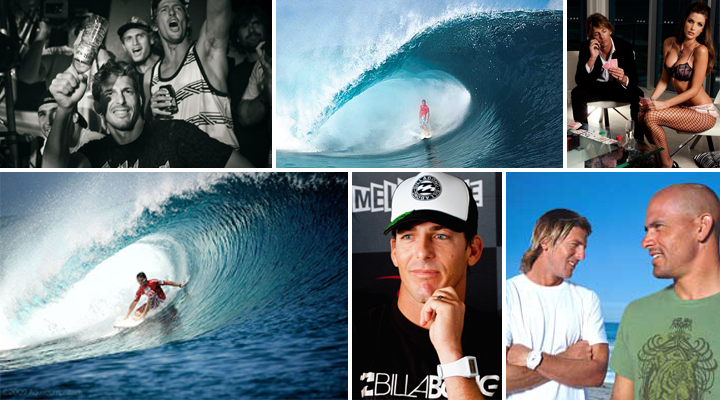 SurfboardLine.com | CHATROOM | Andy and Bruce Irons at the World Premiere of Scratching the Surface from Arico Productions on Vimeo. 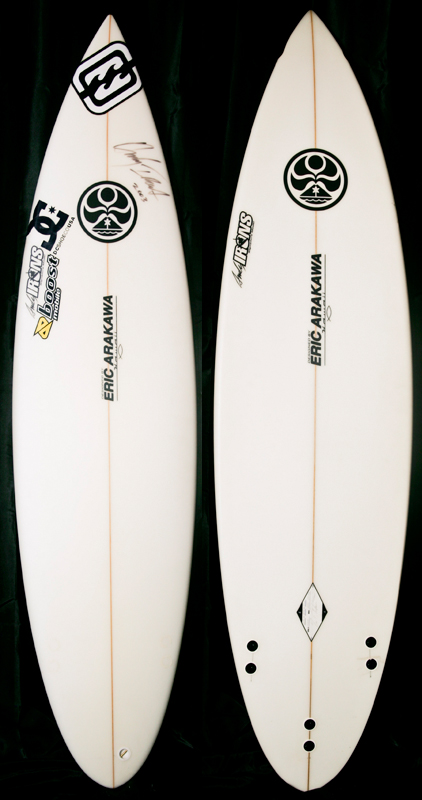 What can I say?  To many words, but need to keep it simple. This board I acquired in 2003 out of Hawaii during the peak of Andy’s career and hype of the Slater Rivalry.   It is what Andy would of  surfed at Pipeline up to 6-8 foot.  2003, Eric Arakawa.  I was fortunate to acquire  this as it was a sleeper on Ebay.  I was going to ride this board, I actually brought it with me to Mexico, for that special perfect surf day.  But that day never came to take this beauty out for a spin.  All original, (9). I was fortunate to hang and chat with Andy during this last summer.  I will cherish those times and be forever stoked that I will be able to preserve a little piece of Andy in my collection. Ma halo Bro. May you be getting barreled for eternity. Buggs