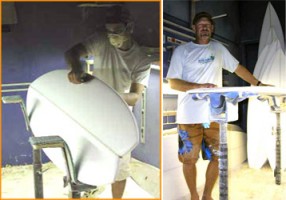 Jeff Bushman started shaping surfboards in Ventura, California during the 1970’s. He shaped boards as a hobby, and, according to the Surftech website, claimed to have shaped 3,000 surfboards before he saw another person make one. In 1982 he took on the name Cyclone Surfboards and shaped surfboards wherever he traveled.

In 1988, Bushman moved to the North Shore of Oahu to put his surfing and shaping skills to the ultimate test. Bushman says, “The best surfers and the best shapers live in Hawaii, and so I went there to see if I was up to it.” He has since shaped 31,000 surfboards to date and has shaped for big names including current team rider Pancho Sullivan, Shawn Briley, Tamayo Perry, Jack Johnson, Luke Egan, and Mick Lowe. Ross Clarke-Jones won the 2000 Eddie Aikau Invitational at Waimea Bay on Bushman’s 10?0 Rocket Rails.

1990’s Hawaiian Gun. Made for Tom. Tom who?  I bought this from Leo Nordine Collection back in th 90’s as a rider.  I rode this in hawaii, Cali., and Figi. Packed it away and forgot about it.  Single concave, Vee , Foam glassed in fins.  I thought I would share it even though it is not really vintage, but I would say it is close to 20 years old.  90’s boards in coming years are going to be collectable, as 80’s are hot now. Just give it a few. All Original. (o) 8/10.