Posted on May 10th, 2011 by Mark in Blog, Bugg's Boards, Bugg's-Aussie Boards, Collections, Sets by Shaper, Vintage Boards. No Comments

A large, deceptively casual power surfer, Simon Anderson achieved high renown in both competition and sheer performance through the early days of pro surfing. Like many pros of the day, he also learned the craft of board shaping and design, thinking it might be useful as a career backup. When these talents came together through the last part of 1980, they resulted in the three-fin Thruster and made Anderson one person who can truthfully be said to have affected every surfer on the planet.

Born in Sydney, Simon grew up second eldest of a big family of boys. Literally big — none of the Anderson boys (Mark, Simon, Grant and Michael) stood under 6 feet. The family lived in a house overlooking Collaroy Beach on Sydney’s north side, where Nat Young had learned to ride. A natural connection to the water, combined with their rangy build, made Anderson and his brothers excellent swimmers, and they competed in the lifeguard surf race championships. But the waves were more entertaining, just as they were proving to be for a whole generation of beach-going Australians.

Anderson soon outstripped his brothers on a board, with an easy graceful style that let him use his size to crush lips and drive through the tube. In the summer months he gravitated to Narrabeen, the beach north of Collaroy, where he found the high-performing peer group he needed — surfers such as Terry Fitzgerald, Colin Smith, Grant Oliver and numerous others. In 1972, not only was he was a surprise winner of the Australian Junior title at Bells Beach, he began to shape with Shane Stedman and Fitzgerald in the Aussie surfboard factory hotbed of Brookvale.

Anderson’s surfing style grew quickly in range and subtlety — and originality. Although it was loosely based on Young’s power carving approach, Anderson took things further, swinging 180-degree turns under the lip backside and stalling there, letting the lip try to knock him off, then emerging at the wave base to swing back around and do it all again. He used Narrabeen’s excellent lefts to perfect the layback style of backside tuberiding. Frontside he scored deep lines with cutbacks and vertical lip smashes that always seemed effortless, even as they threw vast amounts of spray.

Yet his nature — ever the kicked-back Australian, never keen to be thought of as better than his mates — seemed to keep a lid on pro tour success. That is, until 1977, when in a three-week burst he won the Bells Easter event and Sydney’s Coke Surfabout back to back.

The wins put him into top 10 and world title contention, but soon Mark Richards’ twin-fin had come to dominate the tour, leaving big Anderson at a loss. His surfing suited single-fins, but the events were all being won on twins. Frustration led him to consider a weird-looking mix — three smaller fins, one set three inches from the tail, the other two set 11 inches up and on either rail a la the twinnie. The first Thruster, made in October 1980, went with Anderson to Hawaii that winter, then on to California, where he convinced Nectar’s Gary McNabb to make a Thruster model. Back in Sydney, he went to work at his own factory, Energy, and made two more Thrusters. On one of his boards, he won the Bells-Coke double again, and surfing history took its biggest turn since polyurethane foam.

He continued to tour and compete into the mid-’80s, then retired to focus on his shaping and raise a family. His boards are in high demand among both pros and top recreational surfers. He is married to Sharon, has two sons, Alex and Jordan, and lives at Newport Beach, Australia.

Simon never took full commercial advantage of his Thruster concept. “I’m too lazy” was his judgment, but perhaps closer to the truth is that it was never in his nature to deny others a chance to enjoy their surfing. — Nick Carroll, October 2000 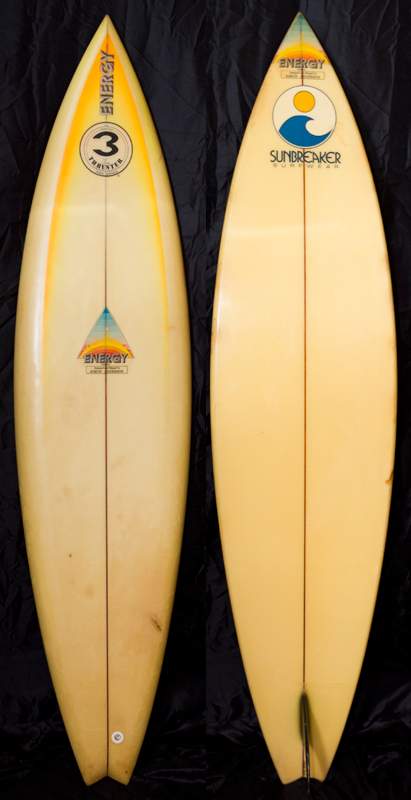 Board Dimensions
Length: 6′ 10″
Width: 19″ 1/4
Thickness: 2″7/8
This is a cool piece.  Simon Anderson’s Personal Rider acquired from Randy Rarick out of Hawaii.   All original Energy early 1980’s single fin made for the surf in Hawaii. Why not 3 fins?  Good Question and the story is yet to be told.  I had a chance to speak to and ask Simon during the Sacred Craft Show in 2010 about this particular board, but he did not recall.  Maybe now that it is featured here on SBL he can authenticate and Tell the Story Behind The Board.  What do you think?   Regardless, great example of the Single Fin Camp design and shape of Simon Anderson.   Honored to have acquired this piece of history in the making.   The Classic Energy Triangle Lam, 3 Thruster Lam.  This era was the beginning of the end of the 1970’s Single Fin Camp and the explosion of the 80’s Tri Fin Madness with neon lights!  (o) 7.5