Born in San Diego, California, Noll became famous for his exploits in large Hawaiian surf on the North Shore of Oahu. He first gained a reputation in November of 1957 after surfing Waimea Bay in 25-30 ft surf when it had previously been thought impossible even to the local Hawaiians. He is perhaps best known for being the first surfer to ride a wave breaking on the outside reef at the so-called Banzai Pipeline in November of 1964. “To establish our lineups,” Greg Noll wrote, “we worked off Kaena Point and back up on the hill behind Pupukea, taking three or four azimuths, until we finally got our lineups in late afternoon, just as this one particular wave came through. It was the only wave I caught that whole day, and it’s permanently etched in my memory.

“In a twenty-five-foot wave at Waimea, the shoulder drops off. The wave I caught at Outside Pipeline that day walled up twenty-five-feet high about half a mile in front of me. It broke to the left, so I was riding with my back to the wave, goofyfoot, and it was a god-awful uneasy feeling. Instead of getting smaller as I rode it, the sonofabitch grew on me. It got bigger and bigger, and I started going faster and faster, until I was absolutely locked into it. I felt like I was on a spaceship racing into a void. At first, I could hear my board chattering across the face of the wave in a constant rhythm. As my speed increased, the chattering noise became less frequent. Suddenly there was no noise. For about fifteen or twenty feet, I was airborne. Then I literally was blown off my board.”
It was later at Makaha, in December 1969, that he rode what many at the time believed to be the largest wave ever surfed. After that wave and the ensuing wipeout during the course of that spectacular ride down the face of a massive dark wall of water, his surfing tapered off and he closed his Hermosa Beach shop in the early 1970’s. He and other surfers such as Pat Curren, Mike Stang, Buzzy Trent, George Downing, Mickey Munoz, Wally Froyseth, Fred Van Dyke and Peter Cole are viewed as the most daring surfers of their generation.
Noll is readily identified in film footage while surfing by his now iconic black and white horizontally striped “jailhouse” boardshorts.
The surfing exploits of Noll and other big wave legends were chronicled in the documentary Riding Giants. Noll (with Laird Hamilton and Jeff Clark) also provides his highly entertaining and significant perspective on Hawaiian big wave surfing that is indexed as a colorful commentary track found in the Riding Giants DVD special features.
Noll is also one of the greatest longboard shapers to ever live and his boards are some of the most sought after and expensive in the world.
Today Noll lives in Hiouchi, California with his wife and shapes re-creations of some of the historic boards from the sport of surfing. Some of these are: Olos and Alaias, a replica of a Duke Kahanamoku board, Malibu Chips, Guns, Da Cats, Pacific System Homes and others. 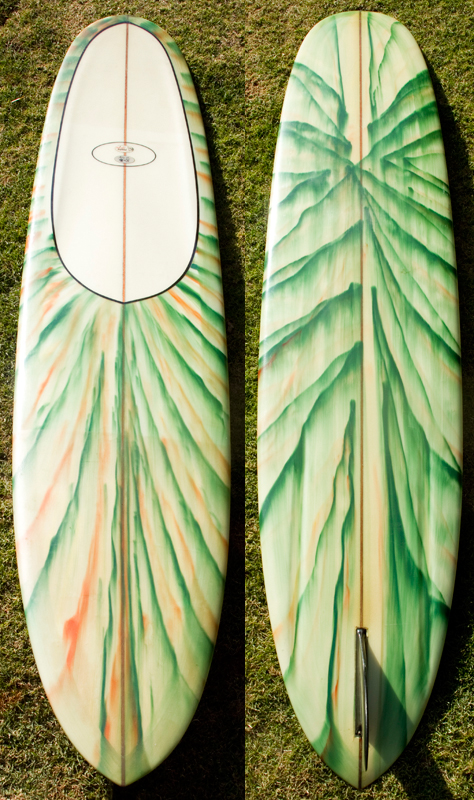 Wow, Wow, Wow!!  What do we have here?  This is an all original 1967-8 G Noll Da Cat Green Acid Splash Pintail with the Classic Da Cat Bolt Fin. This board is as clean as they come.  Purchased on the East coast. I have been seeking one of these for a long time.  Thanks to Mike Jipp he connected me with the owner of this beauty. These boards we way ahead of there time. Classic Lam, white foam deck.   (o) 9

Mini_Gun G Noll 1969-70 all original.  Classic Mini-G Lam, Black and red resin pin lines on deck. Added 1990’s ugly plug. To be removed. Check out the multi-color glassed on fin.  Appears to be original.  Bottom is planed out like a boat v-bottom. with a slight nose kick rocker.  Great buy from my boy, Gumba. Gumba drives a hard bargain and rarely lets the goods go.  But, persistence, laying the hoarding guilt trip and my charm made him let one go. Thanks Gumba. (o) 8   These boards were short lived during the transition of Long to Short and primarily built for the North Shore Hawaii waves. 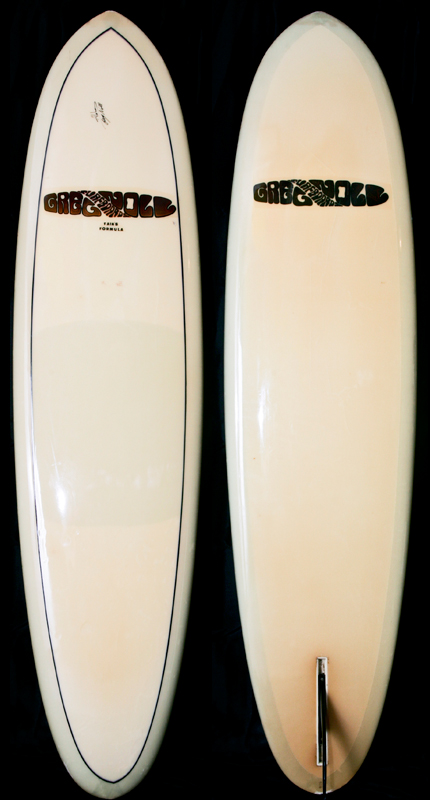 1968-9 Fain Formula Transitional.  This is a cross breed from a Log and an Egg.  Thick and Round.  All Original, adopted out of the East Coast.  Still has it’s original polish.  Got damaged from shipping, thank you Seko. Signed by Greg on a Book Signing Appearance. (o) 8.5

Greg Noll Mini-Gun. Great adoption from Northern Cal.  I love the outline of this board. Clean, all original and ready for 8 foot Makaha.  Unknown on shaper, reminds me a lot like the Lopez Hansen Model. Year 1968-9. Again, signed by Greg. A story behind the board.  I adopted this at a great price and the owner was unwilling to let her go. After months of pressure and calling his place of work. He gave in. (o) 9.5

Cool, speed stick SurfCenter G Noll Hawaii Spear! Shaped by Ben Aipa.  1968=9. 16 inches wide?  The mesh S-Deck is just one of many facets on this char-et. The de-coloration on the deck is not from the sun, but dust and debris that seeped into the grooves of the fiberglass mesh. The photos do not give this board justice. This board is in excellent condition with no twist, no de-lam, etc.  Original fin and light and solid like a rocket ship.  I feel with a solution of high pressured air gun I can clean up the deck.  (o) 8