Skateboarding is what you would call an extreme sport. Skateboarding all began in the 60s. The idea of skateboarding started from surfing. That is why surfers and skaters looks are almost the same. The surfers wanted to see if they could do the same things on the street like they did on the waves.

It all began in California in the Santa Dogtown, which is really known as the Monica/Venice Beach area. California is where skateboarding became popular, and then grew to be all over the U.S. One of the most known groups of skateboarding this toy was called The “Z-Boys”. The group began in 1973. The first Z-boy was 14-year-old Nathan Pratt. Nathan Pratt worked in a surf shop owned by Jeff Ho. The shop was called “Zephyr Productions” where Pratt worked as an apprentice surfboard maker. The shop was located in Venice Beach California. A year later in 1974, Nathan Pratt was not the only Z-boy; he had 5 of his friends join the group. Now the Z-boys had 6 total members. First was Nathan Pratt, Jay Adams, Allen Sarlo, Stacy Peralta, Chris Cahill and last was Tony Alva. The Z-Boys were known all around Dogtown. They were all surfers, which at that time was a sport that was outcast by most people. They copied the same moves on the skateboard as they did the surf board. In 1975 the Z-Boys started the first skateboarding team. This team was not affiliated with Zephyr Productions.

These skaters loved to skate in bowls. They used peoples emptied pools as their bowls. They were the first skaters to invent aerial skateboarding. Which means getting air out of the bowl then landing back in the bowl. They were known as the top skaters and surfers. Their story was put on the front page of Skateboarding Magazine.

In 1977 the Z-Boys were no more. They all went their own ways with big skateboarding companies. They will always be remembered as the group who brought skateboarding to what it is today. Two movies were made in honor of the Z-boys. One is a documentary and the other is not. 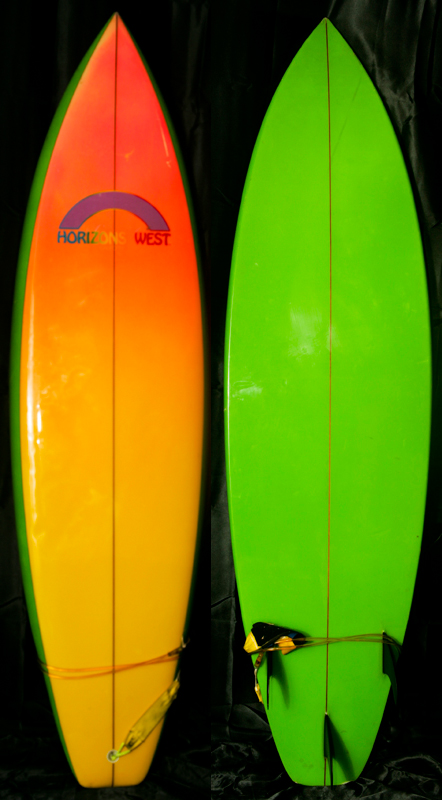 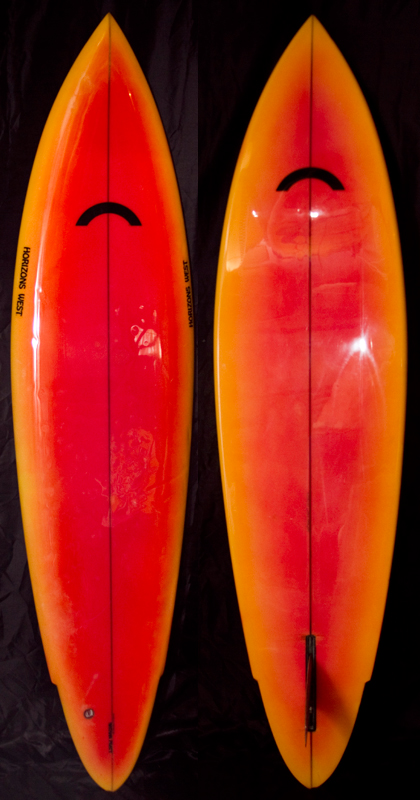 This 1970’s Single wing Pin mini-gun is also a great example of the speed shapes that were coming out of Hawaii and Cali.  This is in great all original condition with some signs of riding with heal dents on the deck. But otherwise great condition with no dings. A striking Orange, Tangerine Tint.  Also hand shaped by Nathan.  Acquired this out of the Nordine Collection. 8.5 (o).