Never anything but individual, Terry Fitzgerald emerged at the start of surfing’s true pro era — the ’70s — and played a key role in finally pushing high performance way clear of the sport’s longboarding roots and into the realm of the power carve. In his prime, he’s represented the peak example of the “total surfer” — a man who could ride any wave, anywhere, on his own equipment, without compromise.

Back in Australia, Fitzgerald carried his design thoughts into Hot Buttered, working with the super-hot performance school at North Narrabeen. Surfers and shapers who passed through his factory over the years include Simon Anderson, Col Smith, Derek Hynd, Steve Wilson, Greg Day, Greg Webber and many more. Along with their unique design twists, his boards became famous for the airbrush spray work of Martin Worthington, who drew anything from leaping dolphins to psychedelic sunsets.

By the early ’80s, Fitzgerald had set up Hot Buttered in places as far-flung as England, the United States, Japan and Papeete — well ahead of today’s trend toward multi-national surf corporations. Yet his disparity of interests, and his growing family, would always catch up with him, limiting the size and scope of his empire building. He was a founding member of Australia’s original pro surfing organization, the Australian Professional Surfers Association and took a strong hand in reviving his country’s flagging competitive fortunes in the mid-’90s. He helped pull together an industry-wide effort to step up junior competition. He married the spectacular Pauline in 1971 and had three sons, Kye, Joel and Liam — all of whom are keen surfers. Today, Fitzgerald runs Hot Buttered out of Sydney and lives just north of Narrabeen with Pauline and youngest son Liam. Kye and Joel both have substantial international reputations as freethinking individuals who are prone to big carves — picking up just where their father left off. — Nick Carroll from surfline.com

I must say this is one of my favorite pieces in my collection.  An original HB Hand Shaped  1970’s Terry Fitz.  Winger Pintail Gun with mermaid airbrush.  The tail has had a repair, otherwise, all original.  Purchased this out of Rob in Oz.  This was such a spiritual time for the surfing culture and Terry himself.  Discovering speed with control and grace.  This board truly defines the good times and highlights the peak of Terry F. era.  (o) 7.5/10 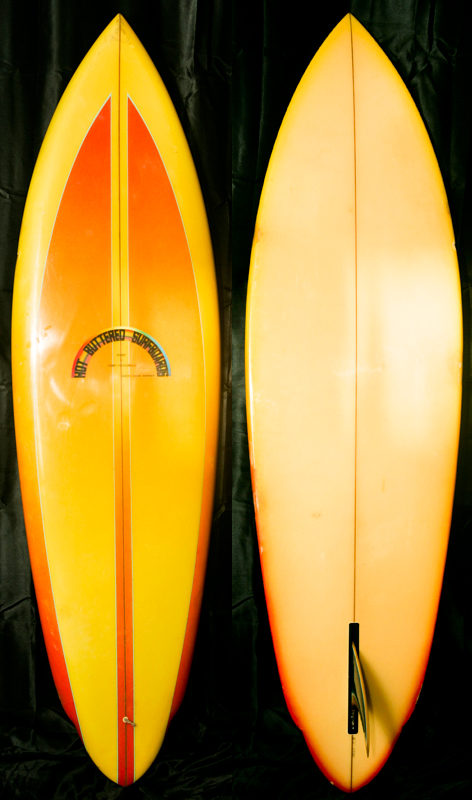 Hot buttered wing pintail shaped by Hank Warner with the classic yellow,red paneled airbrush.  Purchased this here in the states.  You don’t see to many Hot Buttered come up for sale locally. Thus, jumped on it. All original, had one small ding repair.  (o) 8/10 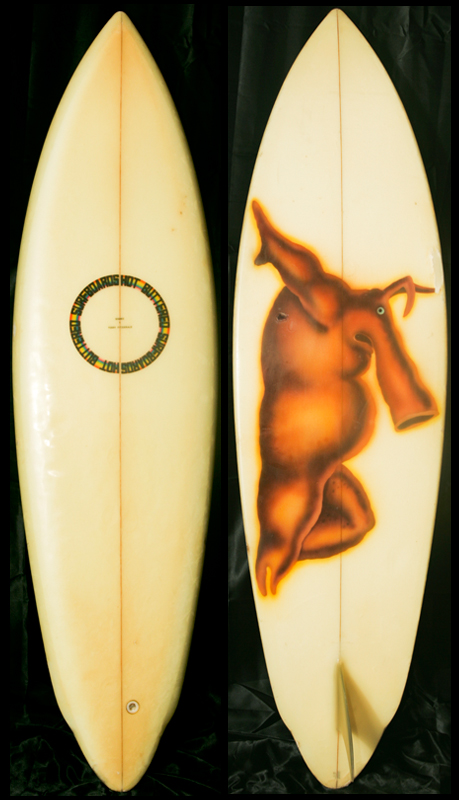 Captain Goodvibes! A legendary carton character from Tracks Magazine during the 1970’s. This is a very collectable icon, the “Pig of Steel”!. Considered to be the archetypical surfer during the 70’s . A classic cartoon by Tony Edwards. Ebay Oz Purchase. The classic winger pintail with a clear fiberglass fin. All original and bitchen. (o) 8/10