Are stupid as it sounds, East Coasters are expected to perform in Hawaii. They come from some of the worst surf on the planet, but after so many have stood out in the ultimate arena, we have come to presume success. Not long ago, an East Coaster in Hawaii was hailed for merely paddling out in serious surf. To perform was unheard of. Jeff Crawford rubbed out those notions in the 1970s by emerging from Florida to claim the loftiest prize in the sport, a Pipe Masters crown. When he returned home, he brought everyone else up to speed with performance surfing, inspiring the generation that would dominate today.

Crawford was born in Melbourne Beach, Florida, but as the son of an Air Force commander, he didn’t settle in one place. Before establishing roots back in Central Florida, where his father was commander of Patrick’s Air Force Base, he would live in Virginia, Japan, Hawaii, Maryland, Oklahoma, and North Carolina. While attending Gainesville High (Go Purple Hurricane!), he began making trips to Cocoa Beach and New Smyrna to surf. He mowed lawns to purchase his first board, and drew inspiration from Smyrna kingpin Kim McNair.

Something of a late bloomer, he wasn’t immediately successful in competition, finishing second in his initial event but becoming frustrated after spending an entire season struggling to emerge from the lowly 1A ranks. “Every time I was ready to win,” he laments, “someone new came along.” By graduation in 1970, he had progressed to 4A, the ultimate rating. Crawford enrolled in Brevard Community College, where he pursued a pre-med degree in hopes of becoming a veterinarian or orthodontist. But as the surfing accomplishments began to mount, the education was shelved. In the 1972 U.S. Championships, he finished second in Mens and earned an invitation to the prestigious Duke Classic. At the World Contest at Ocean Beach the same year, he landed seventh, but his true calling came from the power of the North Shore.

In Hawaii, Crawford would have to prove himself once again. “They didn’t think much of East Coast surfers back then,” he remembers. “They were all glad to get me in a heat. It was, ‘Good, I got that guy.’ They wouldn’t cut you slack to save your life. I ended up going left at Sunset just to get a wave.” Despite the cold reception, he finished third in the Duke, where he would become a perpetual finalist.

The Pipe Masters was quickly becoming surfing’s showpiece, and Crawford overcame the likes of Gerry Lopez and Rory Russell for a surprise win in his first showing. (He was invited the previous year, but a spiteful co-worker at Primo Surf Shop intercepted the mail and replied that Crawford couldn’t make it.) “I was lucky,” he says of the colossal victory. “The waves were shit. I got a big barrel from the outside right through the middle, cause I had an 8’2″ and everybody else was on a 7’6″. But the next year I was on their level.” Unfortunately, the day before the ’75 event, he was scalped by the reef, leaving him out of the running for a repeat showing.

Crawford spent most of the decade in the islands, but each summer he would return to Florida to rule the East Coast pro events and hold court at Sebastian Inlet. “Sebastian’s a summertime spot,” he says,”and from ’76 until ’92 there wasn’t an epic swell that didn’t have me on it.” During that time, he built several surf shops in Brevard County, including Inlet Surf and Sport and Crawford’s Surf and Wear. He sneaked into the inaugural IPS Top 16 by way of his win in the Florida Pro (he defeated Rabbit in the final), and finished as high as 12th in 1978. Downplaying the gravity of his ability at Pipe, he called the wave “just a big Sebastian left.”

With some illegal business transactions catching up to him, Jeff dumped the shops for an extended surf trip, spending a few years traveling in Bali and South Africa. Of his dealings, he confesses, “I’ve always been very good at what I did. It didn’t seem like a big deal at the time, but they’d put you away for a long time today. I made a lot more money legitimately than I ever made otherwise. If I could do it again, I would have done it different. You probably never would have heard of me. I’d have been a doctor.”

Since returning to Florida, where he resides near Sebastian, Crawford has spent eight years and seven lawyers attempting to prove to the government that his earnings are justifiable. After a stint as an importer of wild animals, he has picked up day-trading as a hobby and occupation. Married to Karen since 1982, he has two children, Marina and Adam (himself a rising presence at the Inlet).

Crawford still shows up at Sebastian when it’s on, and people still give him space. His impact on the area’s performance boom is undeniable — including the likes of Charlie Kuhn, Matt Kechele, Todd Holland, Kelly Slater, the Lopez brothers and Hobgood twins. “You only learn from emulating others,” Jeff declares. “When I came back from Hawaii, I was surfing at a higher level than anyone had. It took 10 years, but they caught up, even surpassed it. A ball rolls easier once it’s rolling.” — Jason Borte, June 2001 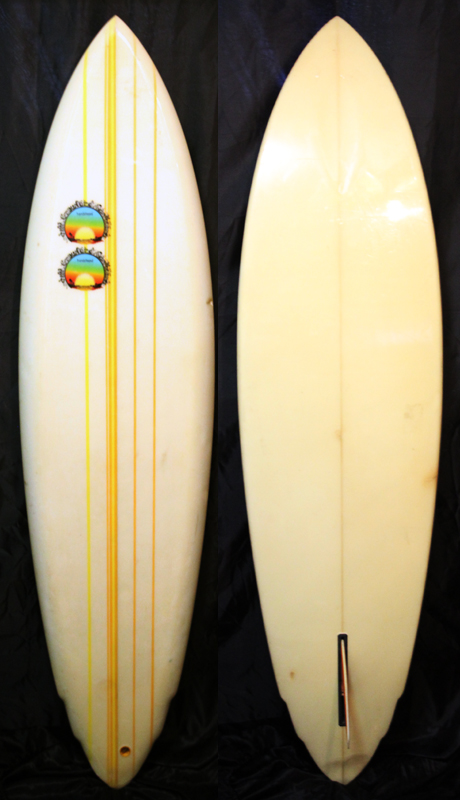 Acquired this out of the East Coast.  Not the best example of a Crawford, yet I have not seen to many popping up.  Interesting Double Bump Pin Tail. Era, 1978  Classic Crawford Sunrise Lam, Bane Box and the beginning of the aggressive movement of fast lines with high performance in mind.  (o) 7.5