Known for his distinctive designs and innovative style, Jeff Ho has been a seminal force in the surf and skateboarding worlds for more than three decades. After creating his first skateboard at age 8, he went on to craft his first surfboard at age 14 – but he perfected his design with a board he made two years later. His passion for surfing and desire to find a board that performed to his standards led to a new obsession – designing and building custom surfboards.

He began building surfboards in his garage, re-making old boards he found on the beach. But Jeff had his own theories about how a surfboard should look and perform, and his ideas were far from mainstream. In 1966, Jeff found a new home at Robert’s Surfboards in Playa Del Rey, where owner and local legend Bob Milner took Jeff under his wing. Using Bob’s tools, Jeff learned how to repair and then how to build high performance boards, from start to finish. The second board he build in Milner’s shop was unlike any board before it: a swallowtail board. This innovative split-tail design would become a hallmark of his creative work. With new ideas and more inspiration, he began designing and building shorter, lighter surfboards in various underground surfboard factories all over LA.

Jeff was also one of the first in a long line of surfers to ride the waves at the Venice Breakwater and the now infamous P.O.P. Pier. Where he pioneered, others followed. As people became more familiar with his surfing and his handiwork, Jeff formed the original Zephyr Surf and Skate Team, which evolved into an award-winning competitive team that spawned an array of young talent. The team eventually grew to more than 30 members, 12 of which (including Jeff) were featured in the critically-acclaimed documentary, “Dogtown and Z-Boys.”

Jeff began selling his custom-made boards from his truck at the beach and at several local surf shops, including one on the corner of Main and Bay Streets then known as Select Surf Shop. As his boards began to sell more rapidly, Jeff decided to purchase the shop himself, and in 1972, Jeff Ho Surfboards and Zephyr Productions opened its doors.

With the invention of urethane wheels, the art form of skateboarding began to take shape, and Jeff was once again on the cutting edge of design and innovation. He created the original Zephyr skateboard, which would become a standard in the skateboarding world and would be imitated time and again.

Today, Jeff Ho’s legacy lives on; although the original Zephyr team members may have scattered, the team continues to grow. Jeff continues to surf, design and build surfboards and skateboards, and still chooses to do most of his artwork by hand. Jeff’s unique designs are known around the world and his boards are considered collector’s items.

Jeff splits his time between his homes in LA and Hawaii and is currently the Surf Editor of Juice Magazine, a popular publication that covers surfing, skating and music.

Jeff Ho has continued to surf, shape and build boards throughout his life, making the Zephyr brand one of the most legendary names in skateboarding and surfing. 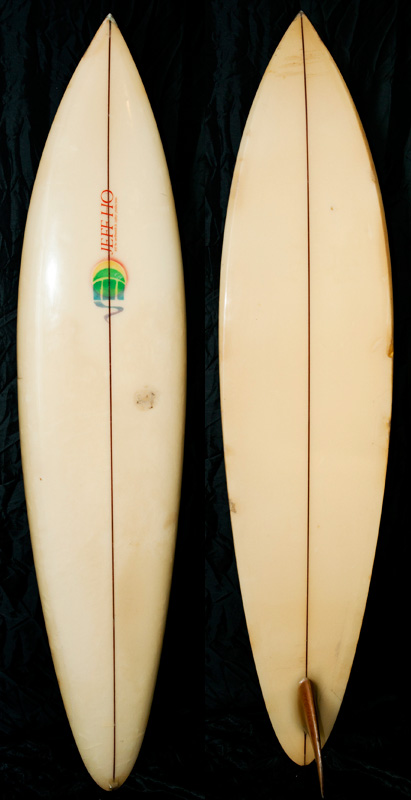 I found this rare find on Ebay of all places. The owner of this collectable Ho acquired it at a garage sale for $75.00.  I paid 4 times that.  Not bad for a great find.   But to bad for he that sold it to me as he did not realize what he had!   This is truly a rare piece – from the wood custom made fin to the air brushed Ho Lam,  – find another.  Board is in all original condition, water tight, very few blemishes.  I would say late 60’s,early 70’s shaped.  Most likely 1973.   (o) 8

“This board is also a very rare find with provenance.” –  Bill Urbany, a ghost shaper of Jeff Ho and Air Brusher Wrote: This board was made for a good friend of mine named Michael West.  It has a lot of history and was made during the height of the Jeff Ho / Zephyr era.  Michael West was  one of two black surfers who learned to surf in Santa Monica back in the day before short boards happened. Michael was a big classic guy who surfed really well and played music also. He is the orginal “Prince of Bel Air” as his family lived in Bel Air.  His father was a prominent dentist, he had two brothers who were both well schooled and turned into successful business men. Michael was the “Artist” of the family so to speak and mostly hung at the beach while attempting to satisfy his parents by acting like he was going to school to be something.

Michael had me shape him a classic type of board, sort of a mini longboard and some how he convinced Jeff and Skip to allow him to spray the board (paint it) himself. I was present when he painted it and he had just returned from spending time in Georgia, a place he had begun spending more and more time that is why all the “jawja” stuff is on the board.  Sometime went by and Michael moved to New Orleans and turned up dead one day. One of his brothers went to retrieve his body and he also turned up dead. I don’t know the cause of death either.  I dont know whatever  happened to any of Michael’s boards. He had a lot of them and all of his Jeff Ho/Zephyr boards would have been crazy like the one you have now.

Michael was a classic guy and a good friend of mine.  I had a lot of good times with him during the Zephyr days. A chapter is waiting to be written on him, If anyone ever decides to write a book about classic surfers out of Santa Monica before POP burned down.