Posted on May 3rd, 2011 by Mark in Blog, Bugg's Boards, Bugg's-Pro Boards, Collections, Sets by Shaper. No Comments

Jordy Smith 22 girls for Billabong Pipeline event. Jordy showed up on the North Shore this winter with a 22-board quiver of provocative sleds. Some are jealous of the art, others (namely his ex-girlfriends) think it’s gross, Jordy thinks it’s funny. “Kelly had those boards with the girls on them back in the day,” says Jordy. “I thought it was classic, and that’s kind of what gave me this idea.” Jordy Smith’s Quiver for Pipeline > 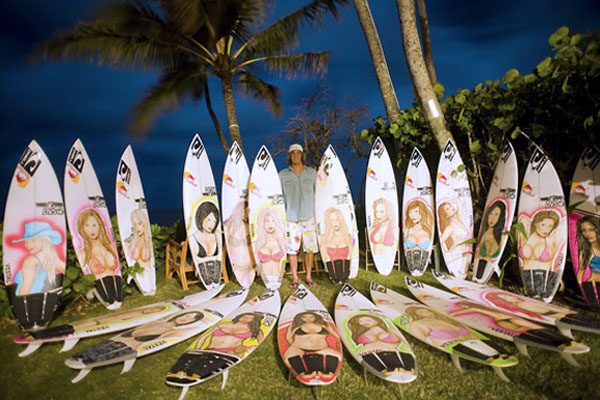 The 22-year-old prodigy born and raised in the rough and tumble land of Durban, South Africa is set to embark on his third year on the ASP Dream Tour. The powerful regular-footer’s spotless season in 2007 saw him claim both the 2006 ASP World Junior Championships as well as the ASP WQS season, qualifying for the coveted ASP Dream Tour in only one year.

Before ever officially setting foot on the ASP World Tour stage as a regular campaigner, Smith had already earned results as a wildcard that exceed what some ASP Dream Tour surfers achieve in a lifetime. Smith earned an astonishing third place finish at the Billabong Pro Jeffreys Bay in 2006 at the age of 18, and then returned as a wildcard in 2007 at the Boost Mobile Pro pres. by Hurley and smashed the likes of Joel “Parko” Parkinson and former ASP World Champ Andy Irons on the way to his ninth place finish.
With an innovative free-surfing approach compared to that of groundbreaking aerialist Dane Reynolds and a competitive mindset akin to that of nine-time ASP World Champ Kelly Slater, it is no wonder critics are touting Smith as the next surfer to eventually dominate the ASP World Tour scene. His novel approach to surfing combined with an intense competitive prowess leave the remainder of the ASP Top 45 fearing a draw against the youngster and it’s a safe bet to say that there will be amazing things to come from Smith as he matures while his career progresses. 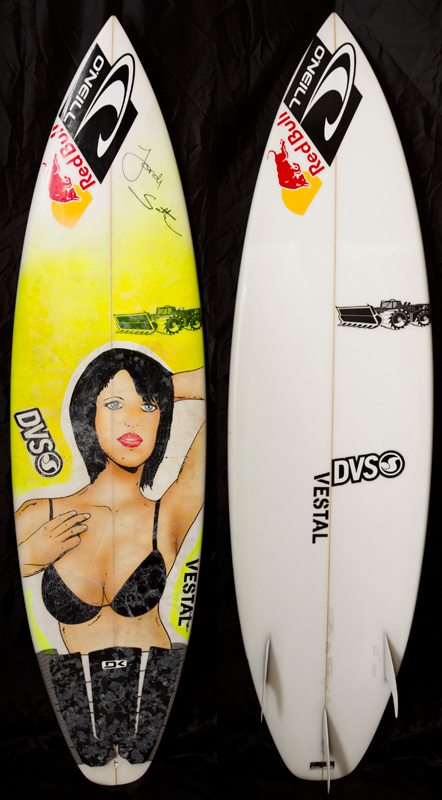 Liam from the North Shore Surf Shop called me on this board.  I did not hesitate in acquiring this board for the collection.  One of the 22 Girl Boards.  I asked Jordy the Story behind the Board.  He explained that each one of the girls resembled a girl that he and or one of his close mates scored, dialed, picked up, what ever you want to call it.  So, I further probed him on who is this Girl on this particular Board?   He took the 5th.  mmmmm,  Does anyone know who it resembles?  My guess is good as yours.  A true classic Board that has a Story yet to be told!.  This board was ridden in Hawaii Winter 2009 by Jordy himself and featured in a number of Ad’s.  (o) 8