To surfers born after 1980, Mark Richards is just the old guy whose record Kelly Slater broke. But not long ago, MR had another title, that of the greatest surfer of all time. So dominant was he, that no one regarded him with anything but awe, even as he paddled out in a silver wetsuit with a Superman logo on his board. It’s doubtful that even Kelly could pull that one off.

Richards was born in Newcastle, Australia, the only child of a car salesman. He was surfing by age six at Mereweather Beach, and his dad’s car dealership eventually transformed into a surf shop. His mom and dad surfed a bit themselves, but the majority of early inspiration came from Nat Young.

On the Australian amateur circuit, Richards routinely surfed in and won the age group above his own. Never keen on traveling for surf, he’d rather go out at home in Mereweather no matter what the conditions. Professional surfing still hadn’t been invented, so as Richards rose through the ranks, his only goal was an Australian Senior Title. “Pro surfing,” he says, “just sort of happened.”

In the groundbreaking winter of 1975, MR was on the front lines of the North Shore along with Shaun Tomson and Rabbit Bartholomew, as the limits of performance surfing were redefined. Riding Lightning Bolt single fins shaped by Tom Parrish, his wins in both the Smirnoff and the World Cup helped bust down the door of Hawaiian supremacy. Dubbed the “Free Ride” generation after the 1977 film of the same name, their surfing marked the rise of Aussie dominance where the least brash on land, Richards, would take the most spoils in the water inside of a few short years.

Thirty years later, a documentary called “Bustin’ Down The Door” would revisit this era as the birth of modern, high-performance shortboarding and professional surfing. Both of which coincided with the rise of MR. In 1976, he won the richest event on the fledgling IPS tour, the Coke Surfabout in Sydney, but he hovered near the top for three years before putting it all together.

Then, building on the influences of shaping legends Parrish, Reno Abellira, Dick Brewer and Spider Murphy, Richards began shaping his own boards. He developed a short, winged swallow twin-fin design that could handle a range of surf — including the sloppy small conditions that comprised most of the tour — and perfectly suited to his loose, angular style. At 6’0″, his swooping turns earned him the nickname “The Wounded Gull.” His patented bottom-turn/snapback combination was ages ahead of its time and set him apart from the single-fin sluggishness of the time.

By 1979, with the twin-fin perfected, MR assumed the throne. For four consecutive years, he dominated the world tour, winning in every type of surf. Even as the thruster gained popularity, he clung to his beloved twinnie and suffered nothing for it. Besides contests, he was a three-time winner of both the Surfer Poll and Surfing’s “Surfer of the Year,” and became one of the first two inductees into Australia’s Surfing Hall of Fame.

Unfortunately, he developed back problems early on, and upon claiming his fourth world title, he slipped into semi-retirement. Coupled with the mental and physical fatigue of holding the title for four straight years, he tore ligaments in his ankle that kept him landlocked for six months. MR went back to Newcastle, where he kept shaping boards, worked in the surf shop and married his longtime girlfriend, Jenny. Already the most successful surfer in history, he could have hung it up as a legend at 25.

Then, in 1985, after competing in only selected events for a few years, Richards arrived on the North Shore for the Billabong Pro. He dominated the early rounds at Waimea and finished the job at Sunset. The next season, at nearly 30 years of age, he won it again, this time at maxed out Waimea and Sunset. In the world’s most challenging arena, he met the alleged new guard and gave them a clinic. It was a perfect mix of encore and grand finale. But his subsequent return to the shaping bay would provide the next set of challenges — and a third act of sort.

“In about 2000, I got this order for some twin-fins from my Japanese distributor for some of his top guys,” he told Surfing magazine in 2004. “And I thought, I can’t send them one of my old boards. They’ll laugh!”

Richards himself had made the switch to more modern shapes ages before. So, instead, he finessed a fuller-nosed blend of high-performance rocker and concaves, added a tiny stabilizing trailer — mainly for psychological purposes — shipped them off and went back to making thrusters like the rest of the free world. When he got a call that the boards worked insane — and a follow up test-run by a factory mate confirmed the report– he made one for himself. It quickly became both his small-wave addiction and a highly popular new model he dubbed “the SuperTwin.”

A few years later, …Lost’s Matt Biolos called Mark and asked if he could computer cut his designs in the US — literally pushing MR to pull his title-winning 1980 stick from the attic and run it through the scanner. The so-called “ride anything” movement soon followed, making three-fins and arbitrary number, and by 2010, there were more Superman logos lining shop racks than during his reign.

But, it’s his hometown where Richards remains most legendary. He’s earned an Order of Australia medal (his homeland’s answer to knighthood), as well as an honorary doctorate from the University of Newcastle. And his name is synonymous with Newcastle’s Surf-Fest — at times called the Mark Richards Pro — where he uses his role as “the Mayor of Mereweather” to raise awareness and support for families who — like he and his wife — have sadly lost a child to SIDS (Sudden Infant Death Syndrome).
The rest of the year, MR runs the shop, works in the shaping room, and enjoys time with his wife and three children — occasionally traveling in an ambassadorial role for Quiksilver or to finish boards for distributors. Swimming keeps the bad back in check, but he has to take it easy in the water — which is fine with him. Unlike many of his former rivals, MR is comfortable with the fact that he has nothing left to prove. Nevertheless, he returned in 2001 to claim victory in the World Masters Championships over 40 division in Ireland, taking down all his old foes and inching ever closer to Slater, still the only man on Earth with more world titles. 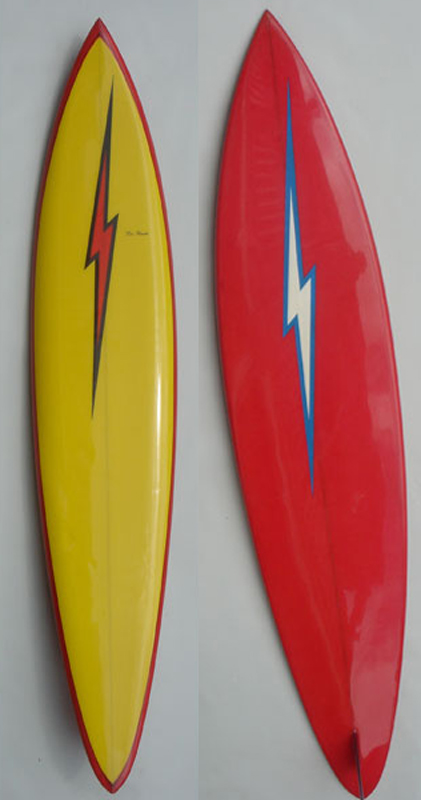 Mark Richards Personal Gun he used to win the 1975 Smirnoff Pro-Am at Waimea Bay. Tom Parrish  handcrafted this board for MR (4 Time World Champ).  Red tint bottom, yellow tint deck, 2 tone bolts and glassed in fin. All original with the exception of a gloss and polish. A great find and stoked to preserve this piece of Bustin Down the Door history during the 70’s!  Priceless and speechless.  The stories and provenance this Board can tell! (8.5) 0 Acquired via – Pintail Mike. 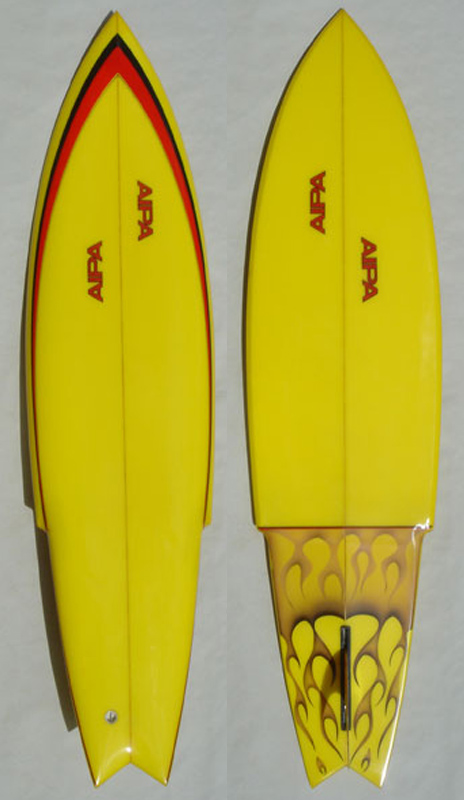 1975, This is 1 of 5 Boards Aipa shaped for MR at the height of the Stinger Phase during the 70’s  MR rode this board at Bells Beach, during his International Campaign to 4 World Champions.  History in the making on this board.  Acquired at the 2007 Hawaiian Surf Vintage Auction in Hawaii. MR autographed and enlighten me with the provenance behind the Stinger:   MR actually buckled this board at the step deck (where the stingers are located). Randy R. completed a restoration on this area and  added the flames to cover the repair.  Other than this, all original with the original fin MR used.   A side note: In speaking with Aipa recently, since this board had reappeared, Aipa has been deluged with calls and emails for custom orders of this 1975 MR Stinger.   Aipa was stoked to know it had made it’s home here on SBL. (9) r