Without doubt the greatest competitive surfer of the ’70s, Michael Peterson set all of the standards for the birth of pro surfing’s world tour, even winning its first official event — the Stubbies Classic at Burleigh Heads in March 1977. Creatively, he bridged the gap between the Nat Young/Wayne Lynch shortboard evolution of the late ’60s and the dynamic superstar performers of the ’80s. He demonstrated a full-power style that combined an acute tube sense with fast, deep rail carves. Yet Peterson — known simply as “MP” to the core Australian underground surf community who idolized him — never converted his legend to a long-term lifestyle, and it has been many years since he’s ventured out on a board.

By 1972, Peterson was Australian champion, and over the next three years, he won every major surf contest held in Australia, including the inaugural 2SM/Coca-Cola Surfabout (1974) and the Bells Beach Easter event three years running (1973-’75). His competitors struggled to get an angle on MP’s extremely fast paddling style and relentless, nonstop carving turns, not to mention his ferocious psyche. Peterson just seemed to take the competition more seriously than anyone else. “You can become a permanent winner,” one magazine quoted him as saying. “It’s just a matter of putting the rest of the people up and watching them, and making sure you’re just a little bit more ‘on’ than they are.” Sounds simple, but in the inexperienced world of ’70s surf competition, few had an answer for the Queensland genius. Back in Australia, his success continued, seeming to peak with the extraordinary Stubbies win against rising star Mark Richards.

Peterson never competed successfully again after the Stubbies event. He had serious mental problems and would eventually be diagnosed as a paranoid schizophrenic after a car chase incident with Queensland police in 1983. After spending some time in various institutions, he was released into his family’s care, and now lives quietly in Tweed Heads, Australia, just a few miles from his old Kirra stomping grounds.

Today, Peterson emerges at the occasional surf function — such as the MP Classic, an event run in his name by the Kirra Surfriders to raise money for mental health services — but he mostly stays to himself. And by all accounts, he hasn’t surfed since the mid-1980s. Just don’t tell him that. As he insisted to Doherty: “I haven’t given it away! Who told you that? Is that what’s getting around?” 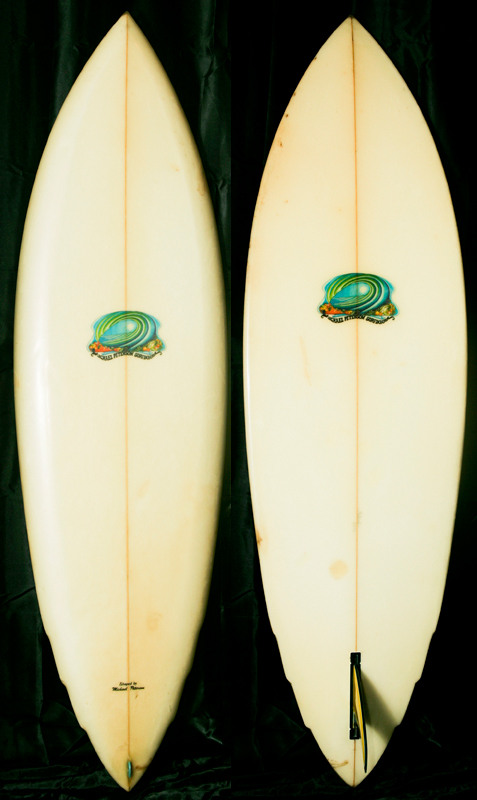 What can I say,  I am sooo very fortunate to have this board in my collecton.  Rare MP out of OZ with all the bells and whistles!  Triple winger pintail, as MP use to ride himself.  This board is all original with a few minor dings.  Great MP Tube Lam,   boxed, knifey rails,  great for low gravity, down the line surfing.   This is a great piece!   (o) 7.5/10