Original Article by Jay DiMartino of World Champions of Surfing

Peter “PT” Townend had a professional surfing career before there was such a thing.  Before MR and Curren. Before Slater and Fanning, Peter Townend was the “best in the world.” Some argue that the inaugural tour was loosely planned and the competition was quite a bit less developed than today, but his title remains. Hailing from the talent rich soil of Coolangata, Australia; PT went on to transcend competitive surfing to become an ardent supporter and organizer of modern surfing in the United States. His resume exudes commitment to the sport and art of surfing as PT has been a competitor, movie stuntman, contest organizer, writer, publisher, marketer, and coach to future superstars; serving as an embodiment of the professional career surfer he hoped to create.

Peter Townend was born in 1953. He began surfing in 1967 at 14 years old and first competed in 1969. By that time, the shortboard revolutionaries were in power, and PT was fast developing his precise and radical regular foot approach riding the epic point waves of Coolangata (home of no less than 4 world champions).

Already shaping boards as well as doing promotional work for Gordon and Smith Australia and working as a UPI journalist for the Sydney Daily Mirror, Townend was building a life in the surfing industry (something unique at the time) and funding his travels simultaneously. Not just industrious, PT was nothing if not competitive, as evidenced by his repeated contest performances at the Australian National Titles and beyond. He took 2nd in the juniors division in 1971 and then 2nd in the men’s division in 1972, 73, 74, and 76. He also placed 3rd in the 1974 Smirnoff Pro in huge Waimea (an event he would later call “life-changing”). PT placed 3rd behind David Nuiwwa and Jim Blears in dribbly San Diego beach break at the 1972 World Championships. Not content with playing third fiddle, he later made history when at 23 years old; Peter Townend became the 1976 IPS World Surfing Champion.

To capitalize on his feat, PT co-founded the Bronzed Aussies in an earnest attempt to legitimize surfing (to the same degree as tennis and golf), build a global franchise and attract big bank sponsors to the sport. The Bronzed Aussies were an Australian surfing team packaged as an alternative to the fading hippie subculture. But surfers didn’t buy the clean cut, clean living brand. Thus, the ill-fated team (including PT, Ian Cairns, Mark Warren, Cheyne Horan, and Jim Banks) that made it common practice to wear matching velvet jumpsuits to surfing events eventually faded into the surf history books.

Another post IPS championship career move saw PT spending a good portion of 1977 riding waves as William Kat’s stunt double for the coming of age cult surf flick Big Wednesday, but by 1978, PT was again focused on competition with back-to-back IPS 5th place finishes in 1978 and 1979. He finally took a long deserved win at the Hang Ten contest in Durban, South Africa in 1979.

In the same year, he moved to Huntington Beach, California to serve as National Team coach and executive director. During his tenure, he coached many future world tour contenders, including three-time world champion Tom Curren. PT coached the Americans to a win at the World Amateur Championships.

By 1984, Townend began working for Surfing Magazine, eventually moving up to associate publisher and advertising director. This led to a position as marketing director for Rusty surf wear in 1999 and then a stint as the publisher of Primedia’s Surfing Group (which included Surfing, Surfing Girl, and Bodyboarding magazines) and events director for Primedia’s Action Sport’s Group (ASG) division.  PT stepped behind the mic as the voice for Prime Ticket and ESPN as a color commentator for both the Bud Pro Surfing Tour and the Association of Surfing Professionals World Championship Tour.

He was president of the Surf Industry Manufactures Association (SIMA) for two years and spearheaded the formation of Surfing America, an organization that oversees ASP North America and the Fosters Pro Surfing Tour and helps focus amateur surfers towards professional competition. In 1998, PT was inducted into Huntington Beach Walk of Fame, the Australian Surfing Hall of Fame in 2001, as well as the International Surfing Hall of Fame.

As of 2010, PT serves on the Board of Directors for USA Skateboarding with the goal to get skateboarding into the Olympics and is founder and owner of ActivEmpire, a company which specializes in action sports brand and media consultancy, coaching, athlete management and promotions.

Original Article by Jay DiMartino of World Champions of Surfing 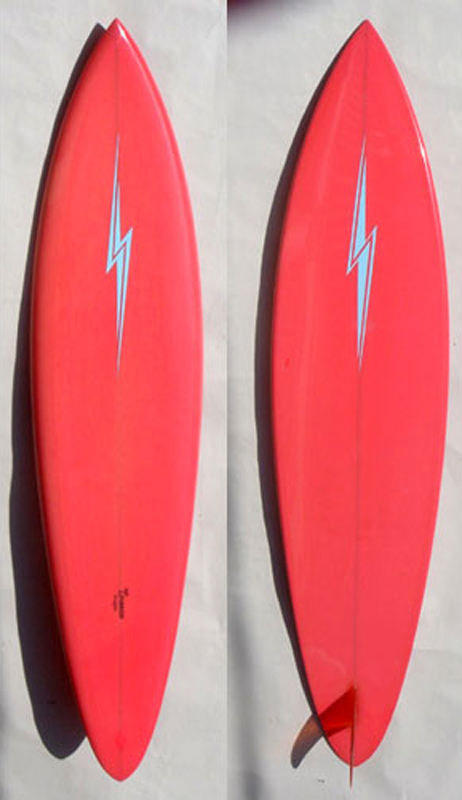 This is an incredible piece of surf history! Crafted by “Shaper to the Stars”, Tom Parrish for 1976 World Champion, Peter Townend. This was one of Peter’s personal “Pink Quiver” North Shore specials! Classic Townend pink lamination with light blue Lightning Bolts, glass on fin with Parrish logo’s. In superb all original condition with minor pressure dents. Most of these boards were ridden to death, so it’s that much more amazing to find one in such great shape.

I have had the pleasure to get to know PT over the last few years and I must say he is so inspired to help wherever he can and is truly an ambassador to the sport of surfing worldwide. A true gentlemen, coach, leader and pure surfer to his core.  Always has a smile and loves to social anywhere and everywhere there is a industry event.  Im so stoked to have his personal “Bust-in Down the Door” 1970’s Parrish North Shore Rider as part of the Cartel Collection!  A pure gem !  Just need to find a pair of his hot pink tight Quik Shorts to go along with the board. PT….?