Jeff Timpone began his shaping career in a Laguna Beach garage in 1968. Later that year he moved to Hawaii, working as a boat builder on Oahu where he continued to build boards and surf. After 3 years he returned to California where he was hired by Russell Surfboards in Newport Beach where he perfected his skills. In 1980 he opened Timpone Surfboards in Huntington Beach.

After almost 10 years of successful business in Huntington Beach Jeff Packed up his house and family and returned to Hawaii in 1989. Landing on Maui Jeff has shaped for the 3 largest sailboard manufacturers on the island. Doing this allowed him to learn all aspects of sailboard construction and board design. Once again Jeff set out on his own and opened Timpone Hawaii — a surf and sailboard factory that operates on the cutting edge of new designs and construction. Having over 37 years of experience allows Jeff to be constantly evolving new and better rail and rocker contours. Building the highest quality surf and sailboards has always been, and will remain, the first priority at Timpone Hawaii.

Every culture has had forward thinking individuals who were uninhibited in their quest for better design. They brought their vision to fruition, then gave it away for the rest to enjoy and expand upon. Surfboard design was no different.

In the late sixties, Brewer, Diffenderfer, and McTavish opened the door with their versions of the new surfboard. Theirs was an unconventional craft with the world’s best surfers as test pilots riding the best waves in world. They changed the look of surfing, and it kept morphing, except the upper end of Big Wave Riding.

A little over twenty years later, Jeff Timpone, Gerry Lopez, and Brewer, once again, pioneered surfboard design for the next phase of big wave exploration: tow-in surfing. Their boards were being ridden like skates in a half-pipe.

The seemingly animated riders were surfing waves so sensational that mainstream media capitalized on the “shock and awe” value with ads, movies, books, and even the cover of National Geographic. Over the last decade, the surfing done on these experimental boards has paved the way for all well respected big wave riders to explore the next level. As with all significant breakthroughs in the evolution of functional design, it inspired their respective shapers and became a starting point for the likes of JC, Al Merrck, and Rusty. 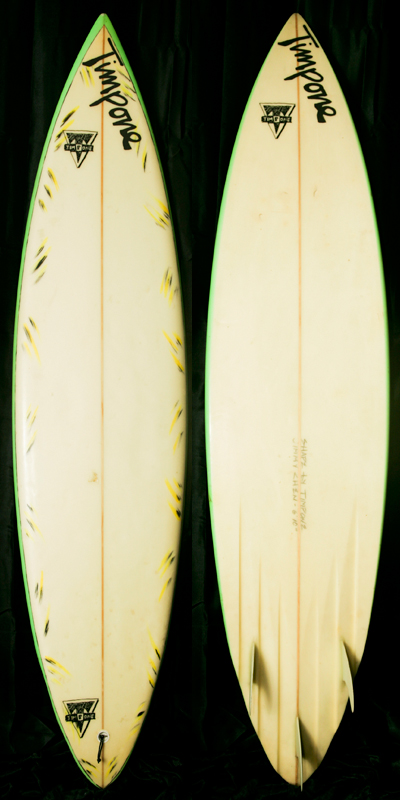 These Boards are not really collectable, but more emotionally attached.  This Cal Gun was an inspirational shape from Byrne’s Deep Channel Shapes.  1980’s. personal rider while I was Captain of the U.S.C. Surf Team. 1989-91.  Great rider in glassy conditions as those Channels dig and never forgive. Classic foam glassed in fins.  Jeff would be proud of me that I have held onto this beauty all these years.  Timpone was a sponsor of the U.S.C. Surf Team  during my term.  Timpone is a big reason why I keep coming to Huntington Beach to surf. 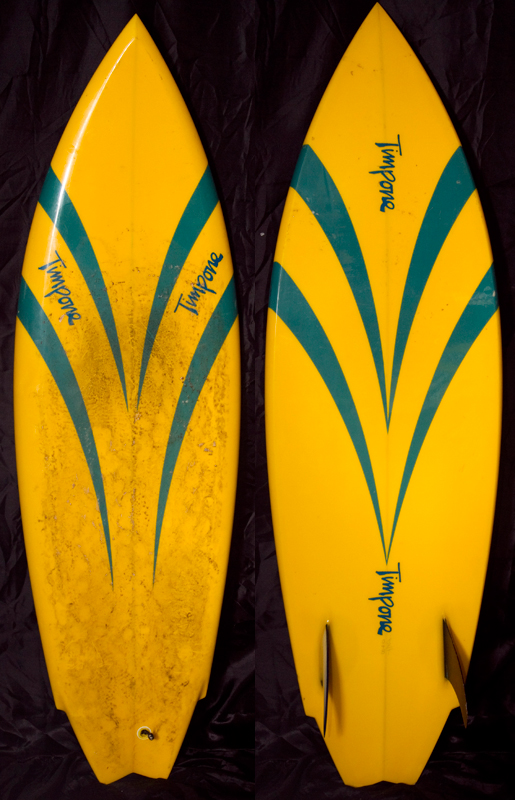 Ebay purchase.  Wanted to add this to my Timpone Quiver.  A Collective Rider, this 80’s twin rips in small mushy waves like HB.  Timpone was a big influence of my surfing during the 1980’s and 90’s . I was bummed to see him pick up and move to Maui.  He has lived in Maui ever since and never has come back. Don’t blame him.  Beam me over Scotty!  He since has shaped boards for Laird and the boys from tow to long.  All original, (o) 8