Tom Blake One of the Most Important Watermen of this Century 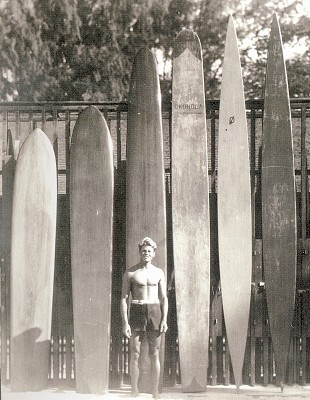 In 1922, Tom became a vegetarian and a pioneer of the health food movement. He has stuck to a philosophy of exercise and strict dietary habits. His understanding and perception of nature has become an inspiration to many.
Tom adapted to life on the California beaches easily. Blake was a “natural” waterman and with less than one year of formal training became a world class swimmer racing against legends such as Duke Kahanamoku and Johnny Weismuller. His work as a lifeguard kept him close to the pool and ocean.

While working as a lifeguard at the Santa Monica Swimming Club in 1924, Tom found an old surfboard being stored there. He paddled out into the surf, and got his first successful ride. Realizing the sport was quite enjoyable, Tom traveled to Hawai’i that same year to surf in the warm water. For the next thirty years. Tom would either live in or travel to, Hawai’i every year. 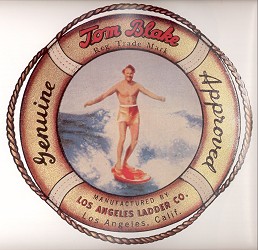 During this era, surfboards weighed between 90 and 150 pounds. Some of the Hawaiian 16-foot long Olo boards weighted as much as 200 pounds. Because of the weight factor, Tom Blake conceived of and build his first hollow board in 1926. The first hollow board was a redwood plank that had hundreds of holes drilled through the deck and was covered with a thin sheet of veneer, top and bottom. The next step in the evolution of the hollow board was to hollow out a solid board by carving chambers in the hull. This was first done on Tom’s racing paddle boards. Step three in the hollow board evolution was the use of transversely braced hollow hull, using ribs for strength, much like an airplane wing is built The result of this design was a strong 40 to 70 pound board, depending on length.

The hollow surf and paddle board soon could be found worldwide. From 1932 to the early 1950s, there were four major builders of Blake’s hollow board. Thomas Rogers, Robert Mitchell, L.A. Ladder Co., and the Catalina Equipment Company. The hollow paddle rescue board was adopted by the Pacific Coast Lifesaving Corps and used by the Red Cross National Aquatic Schools for instruction. Today the rescue paddle board can be found Internationally on beaches where lifeguards are employed.
In 1928, Blake won the first Pacific Coast Surfriding Championships at Corona Del Mar, California, using his hollow surfboard. Tom Blake was the first surfer to ride the waves at Malibu Point, California.

In 1930, Blake built the first waterproof camera housing used for surf photography. In 1932, he started the Mainland to Catalina Paddleboard Race and won first place. That same year he also invented the sailboard. In 1935, Blake placed the first fin on a surfboard and also wrote his first book, Hawaiian Surfboard. Soon after he wrote Royal Hawaiians and again in 1959, authored Hawaiian Surf riders. His most recent book appeared in 1969, and was titled Voice of the Atom. Tom Blake worked as a stunt double in dozens of movies with such noted actors as Clark Gable. A complete list of Tom Blake’s aquatic accomplishments, surf, safety and rescue inventions would take pages to record.

When Tom Blake was given recognition by the National Surf Life Saving Association of America for contributing immensely to many phases of aquatic safety and personal accomplishments in ocean lifesaving, it was the statement, “And most important, the thousands of lives saved because of his inventive contributions in the interest of fellow human beings” which pleased Blake the most.
Tom Blake, a complex, intensely creative yet simple-living man, is considered to be one of the most important watermen of this century. Blake passed away at age 92, on May 5, 1994, in Ashland, Wisconsin.

– All material for this project was researched and written by Gary Lynch. Funding for this exhibit came from Surfing Magazine, with special thanks to David Gilovich.
NATURE = GOD
— Tom Blake inscription in stone, somewhere in Wisconsin, 1964

This remarkable Tom Blake board was built by the Thomas Rogers Company and has some interesting provenance attached.

This vintage board was given to Claude Clavert by Tom Blake in the 1930s to replace a board Tom borrowed from Claude and later damaged. Clavert was a sports writer for the San Diego Union Tribune. The hand written story from the owner with additional information is attached below and is included with this auction.

Here’s an unusual 1936 Tom Blake – Rogers surfboard that, with its history, will be prominently featured in full color within the pages of the book Vintage Surfboards II, that will be available later this year.

Rogers was the first to build surfboards commercially. They began building boards in 1932 and ceased in 1939 when they were no longer licensed to build with the Blake label.

This particular Tom Blake board is one of the earliest examples of a Rogers as evidenced by the drain plug which does show Tom Blake’s name but does not yet show the ‘Rogers’ name. This 70 year old board still has original varnish! If the winning bidder chose to do so, a re-varnish is acceptable with the old wood boards and would really make this antique surfboard pop.

We could not find any records of a Rogers model similar to this one showing up at auction. However, a generic board of similar design but lacking any Blake or Rogers connection sold at auction in 2005 for $10,000. This all original Blake with provenance is certainly a more valuable piece.