Enter Thomas Roland Curren. In 1982, the unassuming introvert strolled into Duranbah and single-handedly dumped Australia on its head. He quickly became the most popular surfer in the world, a title he would hold for two decades. By the time he showed the first signs of slowing, disco had come full swing, again clogging the airwaves.

Legendary big-wave rider Pat Curren didn’t wait past the toddler stage to put his son Tom on a surfboard. By the time Tom was a teen, his depth of wave-mastery was almost scary. In the perfectly shaped pointbreaks in and around Santa Barbara, young Curren developed a style that would be emulated the world over.

A two-time West Coast, United States and world amateur champion, he didn’t need to outsmart his competitors; he simply outsurfed them. Still a gangly teen, he quickly filled out upon entering the pro ranks in 1983. The California surf film Off the Wall 2 was the first to show Curren in form at his native Rincon and Sandspit, ready to tackle the big leagues.

The question of a professional world title wasn’t if, but when. Off the bat, Curren was winning events around the world, but his magical season came in 1985/’86. In one of the greatest heats ever, he defeated nemesis Mark Occhilupo at Bells Beach to clinch his first world crown. He repeated the following year, highlighted by more clashes with Occy, especially at California’s Op Pro.

With Curren at the helm, pro surfing had reached a zenith. The money had never been better, but the enhanced tour would become a victim of its success.

Curren lost interest, gradually slipping down the ratings throughout the contest-a-week late-’80s. He retreated to France with then-wife Marie and their two children, where he played music and soloed at mysto beachbreaks. His popularity remained at a fever pitch. Everyone wanted to surf like Curren.

In 1990, he surfed his way through the trials to reclaim the world title, an impossible feat under today’s two-tiered system. His competitive interest waned after a win at the 1992 Wyland Galleries Pro at Haleiwa earned him long overdue respect in Hawaiian surf.

Rip Curl, his major sponsor, soon launched a video/ad campaign called “The Search,” featuring Curren and crew on an endless quest for perfect surf. Without the structure of the world tour, his eccentricity rose to the fore. He began experimenting with various, often outlandish, designs that detracted from his abilities, but added to his mystique, as did his continued musical aspirations. He regularly tours and records jazz-based originals, playing everything from drums to guitar.

Tom currently resides in Santa Barbara with his wife, Maki, and their two sons. While longtime rival Occhilupo returned to form in the late ’90s and claimed the 1999 world title, Curren flirted with his own run on the tour but never followed through. In 2009, the Billabong Pro at Jeffreys Bay pitted the duo for two expression session heats – they tied with one win each — but even if Occy remains more in the spotlight, Curren’s influence burns brighter. Not just in terms of his continued influence on the average surfer’s style, but his own children: Tom’s youngest, son, Patrick, is currently tearing up the NSSA; his oldest daughter, Lee Ann, is considered no less the best female surfer in France — if not all of Europe.

Click here to find all the Tom Curren photos and editorial on Surfline. 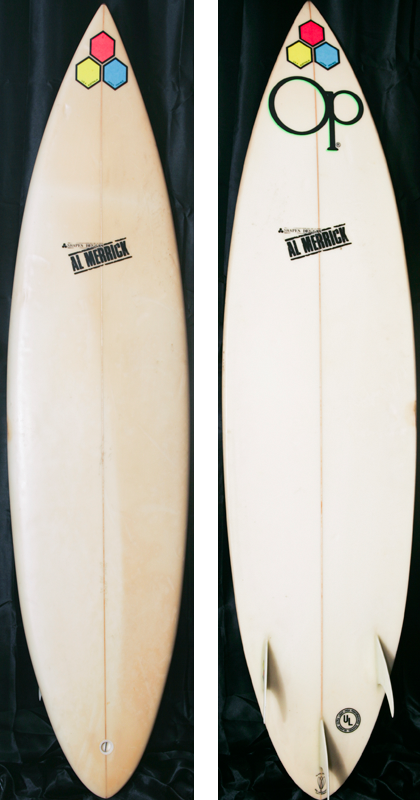 Very Honored to have a piece of history in my collection.  TC’s Personal mid 1980’s Rider personally shaped by Al Merrick.  I acquired this out of the Nordine Collection way way back before I became a serious collector.  I bought it not to preserve and hoard, but to ride and be inspired.  I traveled with this beauty to Cloud-Break in fiji and scored.  For a number of years my High School friend was so inspired on it, he grabbed it out of my garage and proudly placed it in his small collection of Vintage Boards.  This was before I realized what I had on my hands. The unfortunate thing is it was displayed in a place where it got some UV  Rays.  Barley visible but it is there.   All Original and Stoked to have retrieved it back from my friend before he bailed the country to live in New Zealand. – Thanks JD!   (o) 7.5