Posted on May 31st, 2010 by Mark in Blog, Bugg's Boards, Bugg's-Aussie Boards, Collections, Sets by Shaper, Vintage Boards. No Comments

Described by some as the inventor of vertical surfing and others as the ultimate soul surfer, Wayne Lynch’s contributions to the evolution of wave riding are hard to deny. He was a teenager during the critical transition from longboards to shortboards in the late sixties and early seventies. The lines he drew on early shortboards were completely new at the time and his influence can still be seen in today’s surfers.

Wayne began surfing at age 10 and was something of a child phenom in Australia. He won six consecutive Victoria state titles in the juniors division and four straight juniors division Australian national titles. He tried professional surfing for a short time and appeared in some notable surf films along the way, including a breakout performance in the 1969 release Evolution, the 1971 classic Sea of Joy and a 1978 short film by Jack McCoy entitled A Day in the Life of Wayne Lynch.

Like many of the world’s best surfers today, Wayne decided that a career revolving around surf competitions wasn’t for him. When he dropped out of the competitive scene in the early seventies, he said he “wasn’t interested in fame or money,” and that he wanted to be “just a surfer, not a star.” 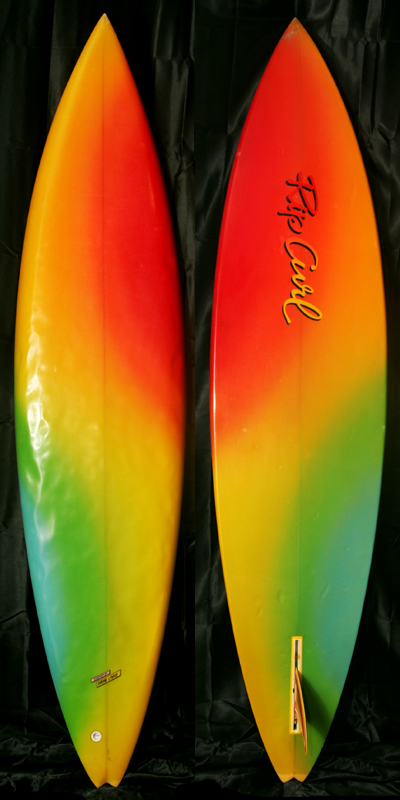 Board Dimensions
Length: 6’11”
Width: 19″ 1/8
Thickness: 2″ 3/4
I met Wayne Lynch a couple years back and he mentioned to me he lost all of his shaping templates in a fire at his property.  I described I had one of his early swallow shapes and he was stoked to hear this as he wanted the template off it.  Here it is and I am glad I came across this Rasta WL.  I acquired this out of OZ.  All original with some heel deck dents, otherwise fairly clean and vibrant with soul and flare.  Rare find and highly collectable. What do you think?  (o) 7.5