After four years of competition amongst the world’s finest surfing pedigree, the goofy-footed talent hailing from Santa Barbara, California continues to cement himself as a perennial Top 10 finisher on the ASP World Tour. Martinez’s lethal backhand attack groomed by Santa Barbara’s famed righthand pointbreaks, combined with his knack for threading the needle in critical barrels, proven by his victories at the Billabong Pro Teahupoo and the Billabong Pro Mundaka, both twice over, prove he has the ability to scalp an event win at any stop on tour. The Californian’s versatility in all conditions make him a dangerous competitor in any event on the ASP World Tour schedule.

Martinez’s claim to four event victories on the ASP World Tour over his four-year career amongst the ASP Top 45 have proven his worth alongside the world’s best and with maturity on his side entering his fifth year on tour, Martinez will be a serious ASP World Title threat in 2010. Martinez’s impressive career has also sparked the interest of Hollywood. 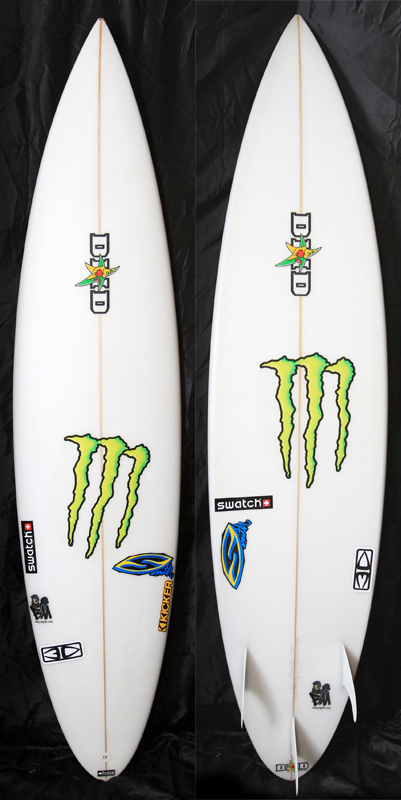 Picked this up in Hawaii during the 2009/10 Hawaiian Season.  Bobby’s Personal Rider.  I don’t think he rode it much, but some evidence of some heal dents etc.  This was a step up for larger Hawaiian Surf.  No his typical daily rider.  All original. (o) 9 dont 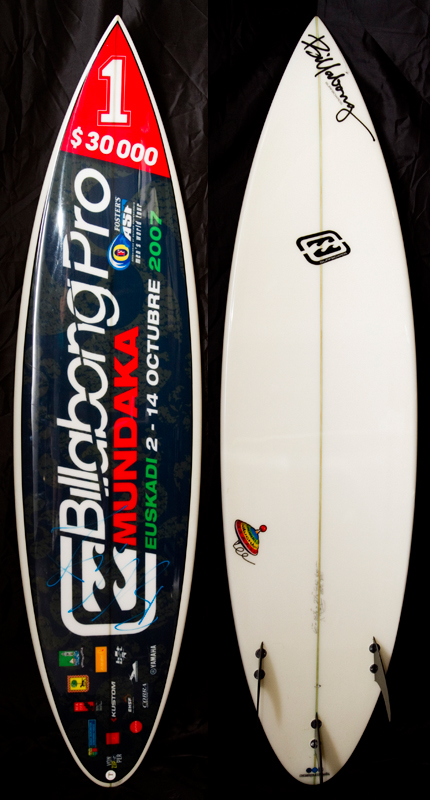 This is a great find!!  His Mundaka 2007 ASP Trophy Surfboard, which Bobby personally sold to me.   Considering all that has transpired since then with Bobby, I’m honored to have been chosen to preserve this moment in time that Bobby personally cherished (even though is was a short lived moment to Bobby).  Bobby sold the other Mundaka Board Trophy on Ebay, which fetched twice what I got this for.  True classic find for the Buggs.

On a personal level, I have spoken to Bobby on a few occasions, he is honest with his feelings and tells it as he sees it.  As most of you know with the recent interview at the Quik NY Pro.  Bobby will always go down as the best Mexican Pro Surfer that has stepped on the ASP Scene.  Go Bobby!!

MUNDAKA, Spain (Sunday, Oct. 14, 2007) —What started as a dream became reality when defending champion Bobby Martinez (USA) became the first surfer in the history of the Billabong Pro Mundaka to post back to back victories at the reeling lefthander today.

“I had a dream that I won the event about a week ago, Martinez said. “I didn’t even tell my fiancé Cleo, but I didn’t want to wake up from the dream. It felt so real and now it has come true, it’s just so weird how it all ended up. It’s good to win an event wherever it is, but winning here last year and then winning here now… it’s just brought back so many great memories.