There have been many impressive brother duos in surfing’s history: Michael and Derek Ho, Shea and Cory Lopez, Andy and Bruce Irons. Never, though, has a set of twins ascended so far in the competitive ranks as Florida’s C.J. and Damien Hobgood. These almost indecipherable goofyfoots and NSSA nightmares turned into top-10 WCT powerhouses, wreaking double trouble on the rest of the world — especially in heaving lefthanders. Hailing from Satellite Beach, C.J. and Damien followed the now well-heeled path from the Sunshine State to surf stardom established by Charlie Kuhn, Todd Holland and Kelly Slater, with CJ becoming the first East Coast’s second-ever men’s world champion.

Since beginning as menehunes in the Eastern Surfing Association, the Hobgoods swapped first- and second-place finishes like they were swapping socks. In 1991, they set the trend in the ESA championships, which they would repeat in the NSSA Boys, Juniors and Mens divisions, as well as the ASP East Junior Pro in 1996. Damien backed it up with a third-place finish at the ISA World Games at Huntington the same year, while C.J. earned a third in 1997 at Australia’s prestigious Pro Junior. They graduated from Satellite High School in 1997 with “A” averages, ample backing from Rusty and a wealth of travel experience.

While at the forefront of the “Pre-School” Generation (the post-Kelly Slater group of teenage tricksters), their committed full-rail power surfing still ranks them above most of their peers and followers. With some professional success under their belts, they turned to the ASP World Qualifying Series in 1998.

Their first year on the WQS marked a separation between the twins, as C.J. finished 11th to qualify, while Damien was forced to push one more year. C.J. immediately rose to the occasion in his rookie WCT season, making the finals in the year’s most treacherous conditions at the Gotcha Pro at Teahupoo, Tahiti. Many considered him the standout of the event, but he was too satisfied and starstruck to finish the job against Occy in the final. Easily requalifying by finishing 18th in his first season, he earned Rookie of the Year honors from the ASP. Then, in the 2001 season — truncated to five events by the 9/11 terrorism attacks — CJ emerged victorious among 10 contenders to claim the world title without ever winning a comp.

Some still allude to the “asterisk” next to his trophy, as he said in 2006: “I think that’s given me more desire to win than if it had never happened — and that’s a good thing, I wouldn’t take that away.” And, despite being plagued by a series of injuries soon after, CJ rallied to win four more WCT events in the coming years – Mundaka, Japan and Teahupo’o as well as the 2008 ISA World Championship.

While winning an equal number of WCT contests –twice at Cloudbreak, plus Tahiti and Brazil — Damien still has yet to answer his try on his brother’s world championship crown. He managed to exceed him in terms of injuries, wrecking a knee in Chile in 2007, then a shoulder in a horrendous 2008 Teahupo’o wipeout — one that nearly knocked him off tour. Still, both brothers are recognized for being equally fearless in waves of consequence — as well as innovative aerialists — the very models of what skills are required to succeed on today’s Dream Tour.

While the Hobgoods are both serious competitors, intent on rising to the top of the heap and extending their careers — the brothers branched out with a surf shop (The Goods), a website (hobgoods.com) and even pro junior specialty event (The Hobgood Challenge) — they are also devoid of arrogance. What anyone who surfs with them will tell you is that they always have fun, whether surfing grinding Pipe or piddly Florida, or posting funny blogs approach. Combined with their studious, competitive nature, that gives them unlimited potential. And when you factor in their healthy sibling rivalry, multiply those chances for success by two. 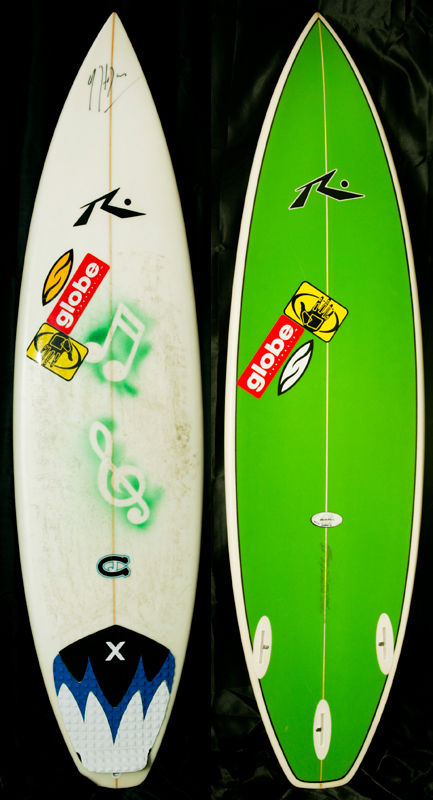 Board Dimensions
Length:
Width:
Thickness:
Shiiit, Dimensions to follow, board buried in storage, (hoarding).  Acquired this CJ personal rider a few years back. This song board was featured in sponsor ad’s with CJ playing wave notes!  Autographed and in all original condition.  Normal wear and tear and preserved in the vault for those to be inspired on what the story’s to be sung when she resurfaces sometime in the future. (o) 8.5 B