Mick Fanning has been surfing since the age of 5 and is now a pro surfer from Australia. Mick is well-known for his super aggressive style and ability to whip his board. Pro surfer Mick Fanning competes at the WCT championship surfing level. Mick Fanning’s nickname is Micktor. Mick also goes by the nicknames Eugene, and White Lightning. This is the Surfing.com Mick Fanning biography.

Height: 177cm, 5ft 10in Weight: 73kg, 161lb
Birthday: June 13, 1981
Birthplace: Penrith, New South Wales Australia
Current Home: Tweed Heads, NSW Australia
Surfing Coach: Phil McNamara
Life Facts: Mick was born in Sidney suburbs of Penrith, he first put his feet on a surfboard at the age of 5, then surf occasionally. He really get into it when his family moved to Tweed head (border between NSW and QLD state) by the age of 12. From this point he became more involved in surfing, friendly competing with the coolangata kids (Joel Parkinson and Morrison) and blooming on the junior Australian tour. He ranked in the top 3 Queensland’s junior surfers in 1997. Four years later he dedicated his first victory as a wildcard on the pro tour to his deceased brother.

Successes: In 2007 Mick became world champion on the WCT pro tour by winning two Quiksilver pro events ( Australia and France) and the Hang Loose Santa Catarina Pro in Brazil which he also win in 2006. This same year he won the billabong pro in Jeffrey’s bay. In 2005 he won his homebreak WCT event in Australia and the rip pro search in La Réunion island. In 2002 his first year on the WCT he won the prestigious Billabong pro in Jeffrey’s bay in South Africa and the title of rookie of the year.

Surfing Style: Mick Fanning is a regular foot surfer. Mick developed what we can call a new school surfing style inspired by the Australian new generations, busting the tail of his board to an extreme limit. He associates his style with an incredible speed on the wave, throwing huge spray which has given him the nickname of the White Lightning. Another nickname could be the elastic as he is really stretchy in his maneuvers.

Other Sports: When Mick Fanning is not surfing, he enjoys cross training and yoga.

Likes & Dislikes: Mike Fanning’s favorite things to do are hanging with friends and partying.

Acquired this out of North Shore Hawaii.  This was one of Mick’s NS Rider’s.  Not sure what year, but if I were to guess, 2005-6.   I have yet to get with Mick to get the Story Behind the Board.   Cool to get your hand’s on one of the Lightnings Personal Riders.  All original, some Hawaii sun fade, otherwise great outline for Pipe and beyond. (o) 8 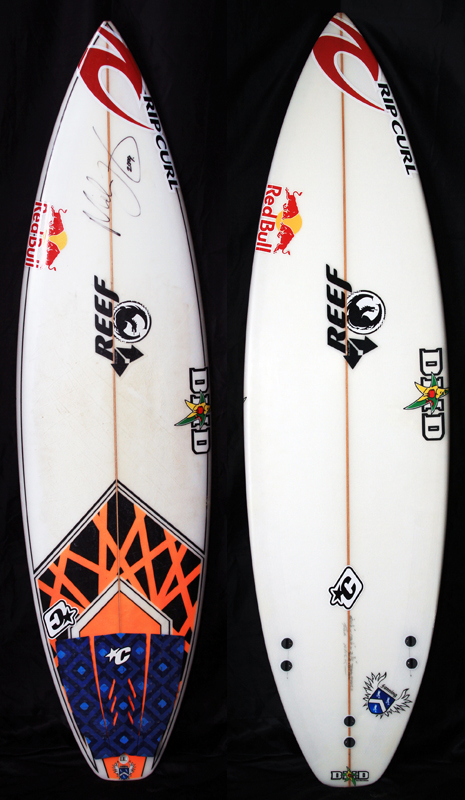 This is a great find!  Acquired this from the WPS ( World Pro Surfers) – The Pro-Surfer’s Union.  Clyde Martin made it happen, Thanks Clyde.   This was Mick’s winning Board at Hossegor France 2009.  Signed by Mick.  DHD Beauty with all the sponsor stickers etc.  I’m stoked to have this is the Collection to preserve it for the generations to come.  This board is soooo tuuuuned up, you place it under your arm and it puuurrrsss.   (o) 9