Reno Abellira entered surfing’s collective consciousness at the 1968 World Contest in Puerto Rico. He didn’t win or even get second. But his path to sixth place revealed some of the fastest surfing ever seen at the time, drawing unconventional lines in a conventional time. While the traditional approach of Fred Hemmings took the world title that day, Abellira’s unique style and equipment put the world on notice that his surfing was poised to leap into uncharted territory. As an innovative performer and surfboard craftsman, the small framed Hawaiian local made waves throughout the 70’s but will forever be remembered for his Smirnoff Pro/Am win. Besting an international field of competitors in what has been called one of the greatest days in surf contest history and inspiring the next generation of shapers and wave riders, Reno Abellira’s mysterious persona left an indelible mark on surfing’s past and proved a key link in its progression towards the future.

Life moved fast for the small framed regular foot. He was born 1950 in Honolulu, Hawaii, learned to surf at age 4, and early on lost his father , a boxer, who was shot and killed in a bar fight. He received his first board at age 11 and won the juniors division of the prestigious Makaha International 5 years later. No small feat to win once, Reno won the division again the following year and further solidified his contest results with a win at the 1966 Hawaiian Noseriding Contest, earning him $200 in what is acknowledged as Hawaii’s first professional contest. By 1968, Abellira was the Hawaii juniors champion and heading to the World Surfing Championships in Puerto Rico. At just 18 years old, he sent a shock through the surfing world with a high velocity, avant guard performance, riding a relatively miniature Brewer model faster and more radically than anyone else.  Drew Kampion writes, “…diminutive Dick Brewer protégé Reno Abellira administered a future shock speed surfing performance but wiped out several times.  The failure of the new school of surfing to win recognition in Puerto Rico dovetailed with a generational rejection of authority and a growing apathy towards competition.”  That contest and Abellira’s surfing in particular signaled a separation of the old guard of surfers from the new crop of innovators. Hippy culture was rising and the Shortboard Revolution had been set in motion.

Reno continued to improve in the next few years. He won the Hawaii state title and placed second in the Duke Kahanomoku all the while putting in memorable free surfing performances all over the North Shore. Abellira was making his mark pushing the envelope of surfing, but his career reached a zenith on Thanksgiving Day, 1974. The Smirnoff Pro was recognized as the unofficial world contest, but the event over the years had yet to be blessed with a giant Hawaiian swell that would, as the contest advertising campaign boasted, “leave you breathless.”

But as the sun rose on contest day, the 36 invited surfers were just that… breathless. Wayne “Rabbit” Bartholomew would later refer to the scene as “the most terrifying sight I’d ever seen.” Consistent 25 foot bombs blew through the quintessential tropical paradise with bigger freak sets that ripped through the contest site and almost shut the event down. But this was what promoters and organizers where hoping for when they doubled the former 7 day waiting period to 14 days during which surfers were on call for the best possible conditions. For Smirnoff, spectators, and Reno Abellira, this would be a truly epic day. Rabbit described the contest further, “This was the most amazing day of surfing ever…”  As the crowd of rabid spectators (estimated anywhere from 5,000 to 10,000) clogged Kamehameha Highway, Abellira surfed his way through the semifinals. While Hawaiian power surfer Jeff Hakman had taken the preliminary heat, the semi was Reno’s, but he would soon meet Hakman again in the final.  With the swell still pumping, Reno Abellira won the final over a stellar group of surfers: James Jones, Peter Townend, Sam Hawk, Clyde Aikau, and Jeff Hakman, whom Abellira beat by mere fractions of a point. The crowd went nuts. And Reno took home a check for $5000.

In the mid seventies Reno rapidly became recognized as one of the hottest surfers on the North Shore alongside Hawaiian surf “gods” like Jeff Hakman, Barry Kanaiaupuni, Gerry Lopez, and Eddie Aikau; especially at huge Pipeline and Sunset. However, Abellira stood out. His surfing style appeared strange yet functional. His slight build didn’t lend itself readily to power surfing, but his low crouching style enabled him to complete tight turns as he stayed close to the breaking lip with radical skateboard-like pumps that propelled him to speeds that no other surfer of the time could match. In addition to his surfing style, his land persona was equally interesting. Abellira’s presence was described as mysterious. He appeared serious and sometimes somber under meticulous hair and decked out in high-stepping, high fashion outfits, appearing a far cry from your average surfer of the time.

Reno Abellira learned to build surfboards from Hawaiian legend Dick Brewer and eventually worked for Lightening Bolt surfboards. In the early seventies Abellira experimented with different fin designs (even the tri fin at one point) but it would be the twin fin that would strike a chord with the surfing world. Mark Richards would later reflect that it was a short and stubby fish sporting two fins ridden by Abellira in Australia that inspired him to design his famous twin fin surfboard which he would later ride to 4 world titles and spark a late 70’s design phenomenon.

As the IPS took shape, Abellira initially shined brightly with a gradual descent to earth, reaching as high as 4th in 1977 before falling to 8th in 1978 and finally 13th in 1979. At 40 years old, he was invited to surf in the Quiksilver in Memory of Eddie Aikau in conditions at Waimea that conjured up images of his past Smirnoff win. Reno Abellira’s surfing career was complete. Free-surfing artist; driven competitor; shaper; and celebrated winner of arguably the greatest surf contest ever held

Acquired this early 1970’s Reno Hawaiian Gun out of Hawaii.  Classic wing swallow tail template  with glassed in fin.  This was made for large Sunset Beach and Waimea Bay.  All original with the exception of  some ding repairs, gloss and polish.  Rare to find these Hawaiian Guns in decent shape. (o) 7.5 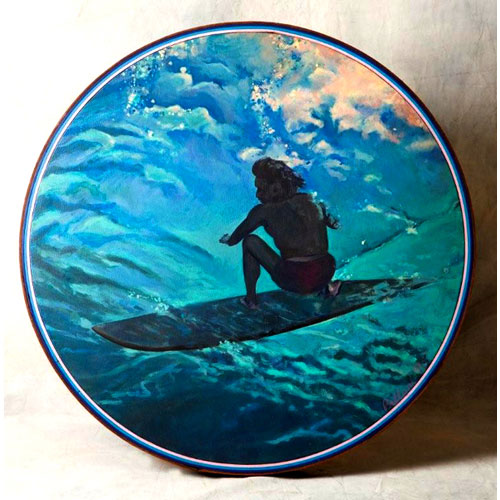 Tom Belloni “Honolua Wall” Art Set 1975
This is a very interesting and unique piece of art. Triple framed in circular fashion, it depicts a rendition of Reno Abellira racing across the face of a Honolua Bay wall. This is one of the pieces that previously hung in the old Chart House Restaurant. It wasinspired by afeature in SURFER Magazine’s March 1974 issue.Oil on canvas, 4′ across, wooden triple framed.