One of the most stylish and successful American goofyfoots of all time was almost an Australian. That’s right: Rob Machado, Cardiff’s humble, smooth-flowing prodigal son, former world runner-up and 2000 Pipe Master could have easily been a cocky, animal-nicknamed ocker who had a single purpose in life: stop those American wankers. And the scary thing is, he just might have done it.

Machado was born in a Sydney hospital to Jim and Chris Machado, a California surfer and British student who had met at an Australian ski lodge in the mid ’60s. Rob’s father, Jim, who had grown up surfing under Ricky Grigg’s tutelage, decided to hit the road after a short stint in the military and a couple of years of community college. Australia was the highlight of his travels, and with the escalating war in Vietnam and the unstable political climate in the States, Machado left his Culver City home and took the slow boat to the land Down Under. Fourteen years, a wife, two sons, a beautiful Collora home and a handful of careers (he worked as everything from a Laundromat owner to restaurant owner to a construction worker) later, Machado — feeling the tug of his roots — bought his family’s return tickets back to America.

Cardiff by the Sea, 1977. Rob was only three at the time, but he already had a thick Australian accent, which prompted his mom to enter him in speech classes. “Picture some funny-looking little kid with an afro going, ‘Yeeeeah, roit, matey,'” says Machado. “I don’t remember it, but I guess it freaked them out.”

Speech “impediment” corrected, Machado carried on like every other North County San Diego youngster, dabbling in AYSO soccer, basketball and, eventually, surfing. Due to family ties, surfing soon took precedence over the ball sports. Not only were his dad and Uncle Ed devoted waveriders, his second cousin through twice-removed marriages, John Siberell, had actually had his name in the surf magazines a few times. Calling the most esteemed amateur in San Diego his “cousin” was Machado’s first taste of surfing notoriety, and it wasn’t long before he tried to follow in Siberell’s footsteps by entering a 1985 YMCA event at Oceanside.

NSSA, WSA, CSA, CISF, PSAA — make up an acronym, and it’s likely that Rob Machado was surfing in it. He felt no pressure from his father, who took a supportive but hands-off approach, but Machado simply did what the amateur surfing Romans did: collect as many trophies as his garage would hold. The weekly contests paid off in results but burned him out by the time he received his high school diploma. At 14, his shop sponsor entered him in a Seaside Reef PSAA event and he made the final, blindsiding “young” upstarts like Jeff Booth and Doug Silva along the way. At 16, he started consistently making domestic pro tour finals and competed alongside Kelly Slater, Taylor Knox and Pat O’Connell in the 1990World Amateur Championships in Japan. At 18, he finished second to Shane Beschen on the domestic Bud Pro Tour, qualified for the newly structured ASP World Championship Tour and was staring at a $75,000 a year contract from clothing magnate Gotcha. “That was right about the time I put the brakes on everything and said, ‘Whoa, wait a second here,'” says Machado. “It was hard getting used to the idea that some company was going to pay me that kind of money to surf and endorse their product. I remember thinking, ‘Am I signing my life away? Is this what I really want to do? Will I be able to handle the pressure?'”

Naturally, Machado signed his life away. But you never would have known it from his demeanor on tour. From triumphant victories at spots like Hossegor and Huntington to bitter losses in crappy Rio beachbreak, the agile, lightning-quick goofyfoot took it all with a Zen-like stoicism. Part of this could have come from his security in being one of the most popular surfers in the world, regardless of ASP ranking. Even when he wasn’t in the winner’s circle, his starring roles in good friend Taylor Steele’s video hits like Momentum (1992), Focus (1994) and The Show (1998) kept him one small step behind close friend and competitive rival, Kelly Slater, in the race for surfing kingpin status.

Kelly and Rob first met at Sebastian Inlet during the 1986 United States Surfing Championships. Rob’s father, Jim, took a picture of the two reluctant grommets standing together a few minutes before Kelly waxed Machado in the Superheat. This was the first in a long string of head-to-head battles that culminated in perfect, 6- to 8-foot Pipeline in 1995, when Machado and Slater paddled out for a semifinal heat that would decide the world title. People wondered what a heat of this magnitude would do to the pair that shared tee times, guitar pics and rental cars on a regular basis. Would animal instinct come out and their true, cutthroat colors show?

In what seemed like a rehearsed stage performance, Machado and Slater took turns riding flawless surf flawlessly, weaving through the tubes of their lives with spine-tingling cool. At one point, in what’s regarded as one of pro surfing’s most memorable moments, Machado streaked out of gaping left tube and, while soul-arching on the shoulder, high-fived his pal Slater, who was cheering him on from the channel. “We just clicked into a whole different world out there that heat,” Machado remembers. “Everything — the beach, the crowd the world title, seemed so distant at the time. We just went surfing.”

Machado lost the heat and the world title to Slater that day, but he still regards it as a career high point. A low point came soon after when a mid-career crisis saw him spiral down the ratings. Despite finding true love in Reunion Island native Patricia Locame (they married in ’98), he couldn’t generate the same passion for his job in the water. Apathy, suspicion of a dated judging criteria and waning interest and eventual retirement of friendly rival Slater all contributed to Machado’s 14th place finish in the ’99 WCT rankings, the lowest of his career.

Some time between ’99 and 2000, Machado was passing through another faceless airport when a book in the gift shop caught his eye: The Art of Happinessby the Dalai Lama. “I couldn’t put it down,” says Machado. “it was like this huge weight was lifted off my shoulders. It taught me about acceptance and understanding. For the first time in a long time, I wasn’t angry.”

A happier Rob Machado set out on the ’00 WCT, and the Lama’s lessons immediately made an impact. He won two events on the European leg and had a shot at the title until an early loss at Trestles. Unfazed, Machado then surfed an error-free event in all-time conditions at Pipeline, an overdue achievement considering all of the memorable heats he’d had at the break over the years.

Machado would finish 2000 rated third and reinvigorated for a title run the following season when tragedy struck again — a broken wrist early on forced him to surf just two events. With the year already truncated by the 9/11 terrorism attacks, he was heading into Hawaii at the bottom of the 2001 ratings. After his first daughter was born the week before, Machado elected to stay home and missed the ASP meeting, comfortable he’d get the one remaining injury wildcard. (Slater’s return to competition had already claimed the other.) Machado’s compadres took the decision as a lack of commitment and gave the wildcard to Shane Dorian, who’d been injured just a couple weeks prior, effectively killing Rob’s competitive career. He felt — in his words — “betrayed.”

“I felt like I was just getting into a groove,” Rob said in 2009. “And then, all of a sudden, it was taken [from me].But it could’ve been a total disaster. I could’ve fallen off the face of the earth.”

In terms of surfing contests, Rob basically did. But with the Dalai Lama still ringing in his ears, Machado focused on building a homelife in Cardiff, including the birth of a second daughter. With the help of new sponsor Hurley, he stayed busy — and happy — doing trips and hanging with the family.

Then, in 2007, his world turned upside again when he and his wife split up. Rob bailed on a six-month hiatus to Bali, surfing and soul-searching with Taylor Steele. The two close friends decided to make a movie about it — The Drifter — which unveiled in 2009 to packed houses. For fans, it marked the welcome return of Rob to the spotlight. For Rob, it marked the return of stability and inner comfort with his place in life — and in surfing. Even if it wasn’t to include a world title.

But there’s always that nagging question of what could have been. What if his parents had decided to settle in northern Sydney for good? What if he had been bred to destroy Kelly Slater instead of slap him five? “It’s fun to think about,” says Machado, “but there are so many small things that add up to who you are. I grew up surfing cool little reefbreaks in a mellow town and emulating Tom Curren. In my mind, I wouldn’t have it any other way.” 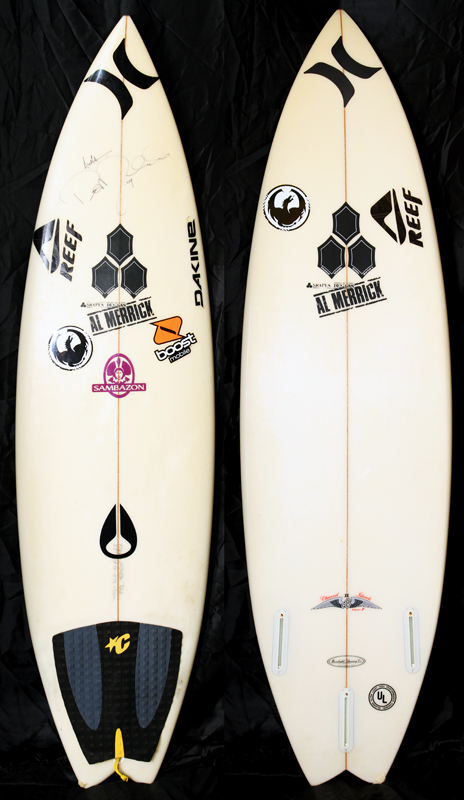 I’m stoked to be the proud owner of this Rob Machado Personal Rider.  Signed by Rob himself 2009.  Acquired this on Ebay for a reasonable price.  All original, possibly ridden during the filming of the Drifter.   Has all the Sponsor Lams etc..  Looks like a fun rider, yet a little to thin for the buddha.  (o) 8