The surf world is full of specialists. There are aerial wizards, tow-in nuts, contest machines and freesurfing free spirits. Longboarders, long-johners,watermen and hellmen. Many surfers can claim knighthood in one or two disciplines, but few, if any, have the broad spectrum of skills that enables them to wear any hat they choose.

And then there’s Shane Dorian.

Since turning up on the surf media map in the late ’80s, the once-tiny kid from the Big Island has won a Hawaiian state title, pushed the paddle-in limits on the North Shore’s outer reefs, redefined deep tuberiding at spots like Backdoor, helped spearhead the “New School” of surfing, won WCT events, contended for a world title, towed in at spots like Jaws and continues to be on the frontier of cutting-edge, high-performance surfing on flawless canvasses like the Mentawais. And if that’s not enough, the soft-spoken 29-year-old has even had his 90 minutes of fame (or shame, depending on how you look at it) in the Hollywood spotlight with a starring role in the syrupy In God’s Hands. “As far as I’m concerned,” he says. “I’ve never really changed my priorities. Ever since I was a kid, my goal’s been to be happy and have fun.”

Shane Patrick Dorian was born on July 19, 1972 in Kailua Kona, Hawaii to Patrick, a former Hollywood actor and stunt double for Elvis Presley, and Susan, an independent, strong-willed woman who went on to compete in female bodybuilding events. When Shane was three, his parents opened a restaurant called Dorian’s right on the beach. And since Dorian was too young to wait tables, the long hours hanging around the restaurant soon forced him to turn to the ocean for amusement.

Like most surfers, he started out on a bodyboard. Along with best friend Mike Stewart, they virtually lived at the once-empty grommet breeding pool known as Banyans. But while Stewart decided to stick to his bodyboard and eventually become one of the greatest watermen of all time, Dorian received his first surfboard, from his dad, on his fifth birthday.

It took him six years to win his first contest, then another three to win the Hawaiian State titles. At the State titles, Dorian met up with hot Hawaiian amateur Jason Magallenes, and soon he was running with a whole gang of young Oahu gunslingers including Ross Williams and Matty Liu. Surfing education became a top priority as Dorian’s mother, who had divorced Patrick when Shane was 12, worked out a system where Shane would spend the second and third school quarters on the North Shore of Oahu (the peak winter season) and the first and fourth quarters back home on the Big Island. “The schools didn’t really understand it,” says Shane. “But I don’t blame ’em. The concept of pro surfing was so foreign to them back then.”

Dorian’s official coming-out party was during the Gotcha Pro at Sandy Beach in 1987. He beat some big names, made it through four rounds and got some media exposure, but more importantly, he became friends with a couple of the heaviest up-and-coming surfers on Oahu, Brock Little and Todd Chesser.

With Little and Chesser leading the way and Dorian, Williams, Liu, Keoni Watson and Magallenes eagerly following, an informal North Shore boot camp was instated. The barracks were the Hill House, just west of Laniakea, owned by a Hawaiian family who provided a base for Little and Chesser that was striking distance from the North Shore hot spots.

It was here that Little and Chesser established reputations for being head drill sergeants at what was called, “The House of Pain.” “I remember this one huge day and Ross and Matty and I were surfing an inside reform,” says Shane. “And then Brock and Chesser came paddling in from this giant Outer Reef session and they called us a bunch of pussies. After that, I was all, ‘That’s it. I’m following ’em.”

Shane proved he could keep up with the big boys and then some. But in ’92, with a few years of heavywater experience under his belt, he followed Chesser and Little out to an outer reef during an exceptionally giant day. “It took us, like, 45 minutes to get out there. And then when we did, we were facing these 25-foot waves with crazy cleanup sets. I sat outside those guys for a while, but then I started getting pissed when they caught a bunch of waves. About that time, the horizon went dark from this huge set and we started scratching. I was too deep, but I wanted a wave so bad that I just flipped around and went on the first one. I launched over the falls, lost consciousness, regained consciousness, couldn’t feel my legs and was foaming at the mouth. I barely made it through that one, but it was a major turning point for me. As Brock said, it was the first time I realized that I was mortal.”

It almost seems like a side note that Dorian stayed on the ASP World Championship Tour for more than a decade. That’s not to say he isn’t a good competitor: he hovered just outside of the top 10 for a number of years before finally cracking the barrier with a fourth-place finish in 2000 thanks to a win at the Billabong Pro Mundaka. But even the Dream Tour couldn’t answer Dorian’s huge aspirations.

Over the next five years, he’d do his damndest. And though his 2008 XXL Ride of the Year Award-winning wave wasn’t 10-stories high, it was close to that thick. And that’s just a foundation of things to come. Because just when you think that Dorian really is too content (he and wife Lisa are back settled land on the Big Island with a son), he’ll remind you where he came from and what he’s capable of doing. 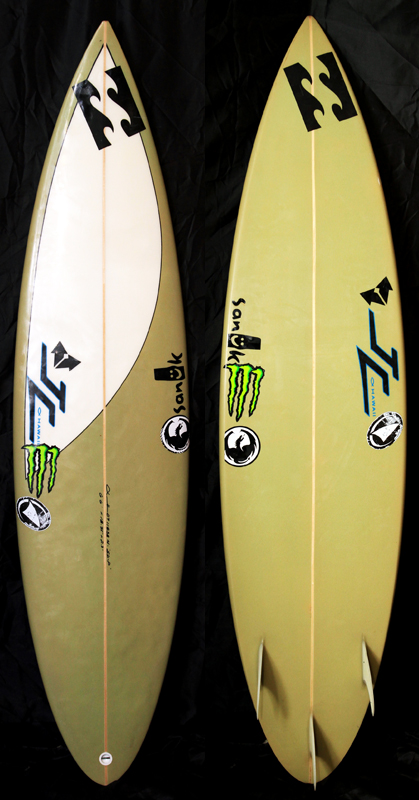 2009/10 North Shore Rider for Dorian.   This board was ridden at Pipeline.  I acquired this on the North Shore after the the winter of 09/10 was complete and all have gone home.  All of Dorain’s sponsor logo’s in place.  Board is well ridden with heal dents.  No open dings, all original.  This spray design was Dorian’s signature design for the season.  find another!  (o) 8 Great Find from a Hawaiian Legend.  Stoke to be able to protect and preserve. Cartel.