Since he was a kid, Sunny Garcia’s dream has been to kick back as a fat, happy Hawaiian with a bunch of kids running around. That existence remained in jeopardy as the one prize that would make him content — a world title — eluded him 14 consecutive years. With the inspiration of a new love and a new fitness regimen, he kept a horde of challengers at bay and, at age 30, led the ASP tour from start to finish to run away with the 2000 crown.

Growing up in Waianae, on Oahu’s West Side, wasn’t an easy task — even for a local. Vincent Sennen Garcia came from a broken home and found surfing as a refuge from fighting and poverty. He owned his division in the Hawaiian Surfing Association and jumped onto the tour at age 17, after dropping out of school. Garcia came out of the blocks with a head of steam as he debuted at the 1986 Gotcha Pro at Sandy Beach. He trounced world champ Tom Carroll and stated flatly his goal was to kick some Top 16 butt. Surfer magazine’s pro tour prognosticator Derek Hynd likened the West Side wonder to a modern-day Cassius Clay, a “slick, black nightmare come to whup some ass.” He just missed the Top 16 in 1987 and was angrily dissatisfied with his performance. There was dead weight in front of him, and all indicators had him rising.

The sudden access to money and independence led to a Hollywood child-star destruction. Drugs and a lack of focus kept him off track, and it wasn’t until the early ’90s that he came close to reaching his potential. His recovery coincided with the much-needed stability provided by his marriage and three children. He’s been in the top 10 in the world every year since 1990, rising to third three times. In 1995, he had only to win a heat at Pipeline in the final event and the crown would be his, but fate intervened with Mark Occhilupo revitalization and Kelly Slater’simpossible mission. Garcia had all but guaranteed victory, and his assuredness cost him.

When Garcia burst onto the scene in the mid-’80s, no one could have predicted he’d remain a contender into the next millennium. During his career, he has witnessed seven different heads donning the world crown. While claiming six Hawaiian Triple Crown titles on raw talent and desire, he gained accolades and respect from his contemporaries. He was never the attention-seeker that chased down photographers to appease his fans or sponsors. Aside from contests, he pretty much stayed away from the North Shore circus altogether, preferring to ride motocross or surf alone. With a pack of young challengers gaining steam and his patience running thin, it appeared his title would never come.

Inspired by the amazing comeback of 33-year-old Occy, the 1999
ASP world champion, Garcia shed 25 pounds and abandoned his beloved junk-food diet. Having divorced a couple years earlier, he remarried the daughter of surfing legend Joey Cabell, Reina, who saw to it that Garcia stayed true to his game. “I can’t give my wife enough credit,” he says. “Whenever I get pissed off, she’s the angel on my shoulder.” Together, they moved to Kauai, where Garcia found sparring partners in Bruce and Andy Irons — two of the most progressive surfers in the world and certain to keep him thinking young. Surfing faster and more consistently than ever, he won the first two events of the 2000 season in Australia and never relinquished his lead. Upon clinching the title in the penultimate event in Brazil, he was greatly relieved but not ready to hang it up. “I’m going back to Kauai and training twice as hard,” he said.

Instead of getting another title, Garcia retired in 2005 only to run into a new set up troubles the following year, spending three months in federal prison the for tax evasion. (He commemorated the ordeal by tattooing “Death and Taxes” across his collarbone.) Sunny stepped from behind bars into a second round of divorce proceedings, but he remained resolute. “I’m definitely going to be looking to go back on tour,” Garcia said shortly before leaving his cell. “Put some damage on some young kids.”

True to his word, the fierce fighter returned to the ring, making another WQS run in 2008. While he didn’t make the WCT, he did find love again, marrying for a third time, and maintaining his strong presence on his home Hawaiian court. 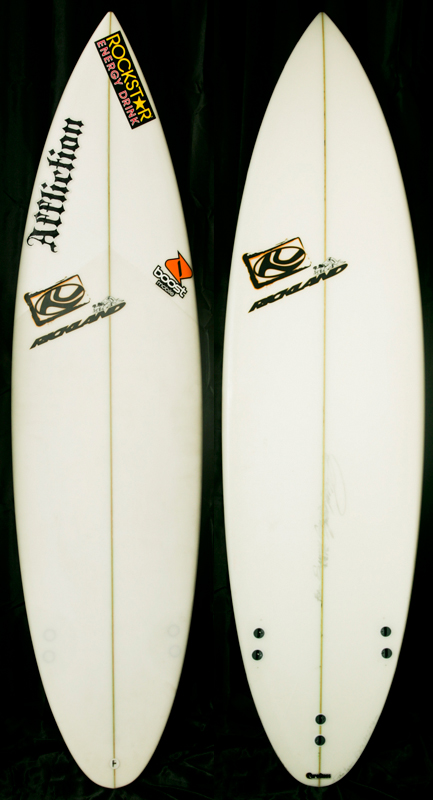 What can I say about Sunny that hasn’t already been said?  I was able to acquire this a couple years back directly from his shaper at that time.  Since then, he is riding another lable.   I had the chance to interview Sunny at the USO and he promised SBL his winning excel pro winning board he road at Sunset.  I have yet to connect, but on my list to execute.