A jack-of-all-trades if ever there was one, Encinitas-based Bill Bahne has had an influential hand in just about every Action Sports movement in the past 40 years. Getting his start in shaping in the ’50s before foam and fiberglass had entered the picture; by the early ’60s Bahne Surfboards was a thriving business.

As the popularity of surfing grew, Bill identified the need for a removable fin system, prompting him to start Fins Unlimited in 1964. Both the surfboard and fin business treated him well, but hardly one to rest on his laurels, by the start of the ’70s Bill teamed up with friend Mike Doyle and the two introduced the snow world to an early incarnate of the snowboard called the “monoski.” It was also about this time that Bill and his brother Bob started up Bahne Skateboards, which quickly became the ride of choice for the quickly growing skate scene. – taken from “The Art of Shaping” 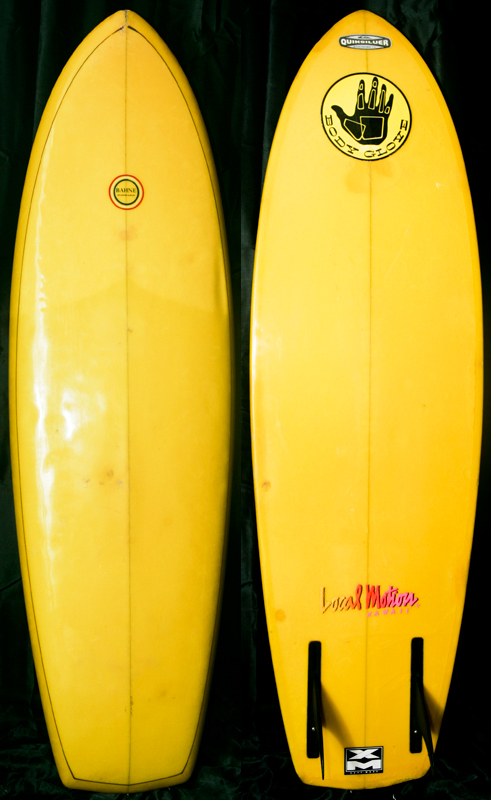 Purchased this Old Twinnie experimental 70’s Bahne from Steve Collins .  Since then I resold it to make room.  Kind of regret selling it as for the time it was a significant point of transitional interest into fin / tail design and into skate moves in the water. As a kid I remember seeing these boards thinking, what the f—-!  Ugly, looking non-functional and stayed away from experimenting  with these.  I wish I would of test rode the Bahne back in the day.  Who knows what I truly want of thought.  All original (o) 6.5/10