Tom Morey and Karl Pope first met in classes at the University of Southern California in the mid ’50s. Tom graduated with a degree in Mathematics in 1958 and went to work for Douglas Aircraft. In 1964 he left corporate life to open Tom Morey Surfboards. In 1965 he invited Karl to join him and Morey-Pope Surfboards was founded.

Over the next five years Morey-Pope would prove to be a profoundly influential force in the surf industry. In addition to surfboard models like the Snub, Peck Penetrator, Blue Machine and Camel, they introduced products like Slipcheck and W.A.V.E. Set. Slipcheck was an aerosol alternative to surfboard wax. W.A.V.E. Set became the first commercially successful removable fin system.

In 1970 the partnership ended, but not until after the two college buddies had left a lasting impression on the sport. Surfer Magazine named Tom Morey one of the “25 Most Influential Surfers of the Century” in 1999, as he continued to innovate and bring out new products throughout the ’70s like the Morey Boogie bodyboard. 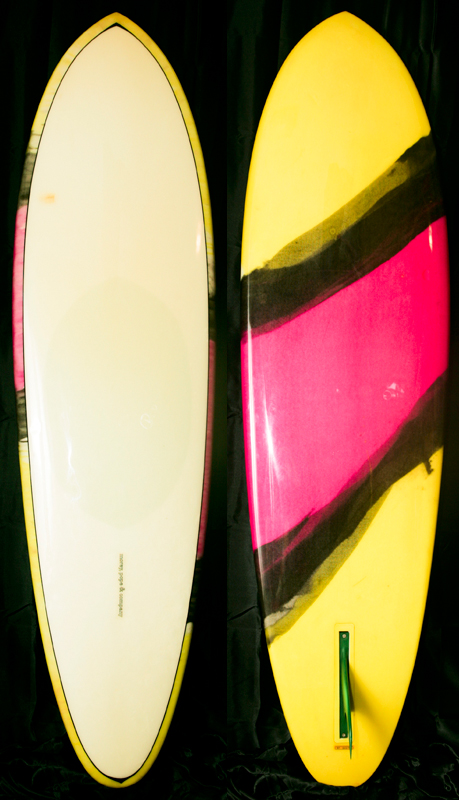 This is indeed one of my favorite pieces.  When I say pieces, I mean art piece.  To me this is Art.  I have it displayed  on my wall as so.   Just check out how the bottom of this board grabs you.   1968 MP Transitional Beauty.  The fin grabs me as well.  I am not sure if this was sanded down or original.  But very cool.   Subject is numbered and all original.  Heart shaped deck patch.   I could get technical on the board but I am to awe struck. (o) 8/10.  Leo Nordine Collection.

1966 Morey-Pope Balsa 9’ 9”Believed to be the one and only balsa board ever built by Morey-Pope. This stellar all original solid balsa longboard has a wonderful, rich honey color patina to the balsa wood.

Tom Morey is one of the all time legends in the surfing world, celebrated for his many inventions and innovations he brought to sport. Just one of his many contributors to surfing was his part in developing slip check, a wax replacement. His interest in the slip check invention may have something to do with the fact that so many Morey-Pope boards from the mid 60’s have factory slip check. This spectacular specimen features some of the most amazing 1960’s slip check art we have ever seen And it’s still all original and nearly 100% intact.

This one-of-a-kind balsa board is in terrific all original condition. There are some repaired areas on the bottom but nothing major, as well as a couple other areas that could use some attention. Comes with the original fin from Morey-Pope, typically resined into the fin box but this one has come out of the box, there is resin inside the box, fin still fits fine and would be simple to re-resin or glue the fin in. An unbelievably rare board, literally one of a kind!

This is a super fine and rare balsa that would be a safe investment and a significant addition to any vintage surfboard collection.