Tommy Tanaka, son of the late respected Hawaiian shaper Ernie Tanaka, grew up in Santa Monica, California but moved back to Hawaii to live with his dad during high school. He started off body boarding Waikiki and then progressed to surfing. Soon he was competing in summer contests and won Hawaii’s biggest longboard contest, China’s Uemura’s Annual Longboard Contest.

He studied and learned the art of surfboard shaping under the wings of his father Ernie and eventually worked full time for him. Tommy later got a full time shaping job for Town & Country Surfboards with the help of his father and in the five years that he was there shaped over 1,000 boards.

Ernie Tanaka passed away a few years after Tommy landed the T&C gig and after his father’s passing, decided that he wanted to start up the Tanaka Surfboards label once again. Tommy’s main philosophy was taught to him by his father Ernie which is: “stick to the basics”. Tommy specializes in shaping longboards and his philosophy on making a great longboard is to “shape each board as if it were my own”.

Tommy Tanaka recently signed with Town & Country Surfboards once again. You can find his T&C longboards at your nearest T&C shop. 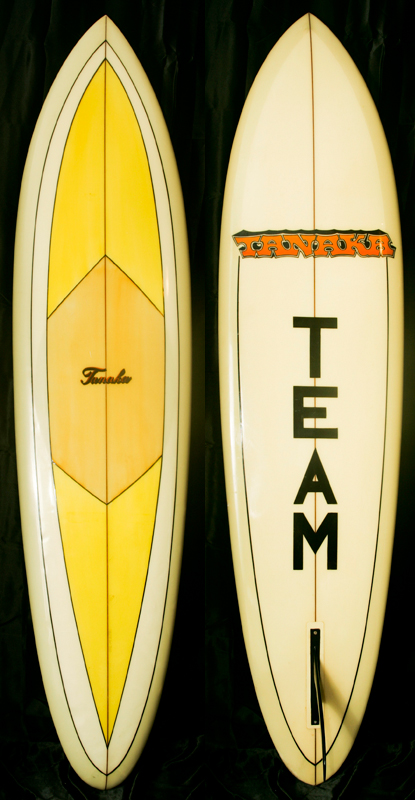 Great Transitional 1968 pintail example from long to short Team Rider.  Unknown if this is a Ernie or Tommy Masterpiece.  If anyone out there can help, greatly appreciated.  Very clean, all original, also unknown who’s personal team rider board this was.   Beautiful Resin Pin line and deck air brush work.  Pintail Mike Acquisition. (o) 9